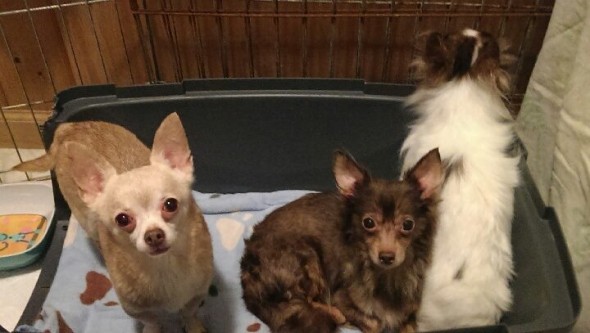 On Saturday nineteen dogs were rescued from horrible conditions in a two –bedroom apartment in Oneida, New York.  All of the dogs were severely neglected and have health problems. The dogs were all rushed to receive veterinary care and most are now in foster homes, but it will probably be months until the dogs are ready for adoption.

A family member of the dog’s owner contacted the rescue group Angels of Fur and reported that there might be a problem. Police and rescuers investigated and were able to convince the owner to give up all nineteen dogs.

All nineteen dogs were in bad shape. They had urine burns on some of their paws and very brittle nails making it difficult for the dogs to walk. Some dogs had exposed bones and a pregnant dog need to have surgery to amputate one of her hind paws.

Rescuers believe many of the dogs probably had never been outdoors. When the dogs were first brought outside they were clearly uncomfortable on the grass and just lay there.

“They don’t even want to go outside to go to the bathroom,” said Melissa Jones from Angels of Fur. “They emotionally hit the grass and say – what’s this?”

Most of the dogs have been placed in foster homes and will need ongoing treatment and socialization before they will be ready to find permanent homes.

Angels of Fur is accepting donations to help pay for the ongoing care of all nineteen dogs.