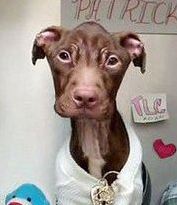 The New Jersey Senate unanimously passed S1303, designated as Patrick’s Law, yesterday afternoon. The bill is named for the Pit Bull named Patrick, who was rescued in 2011 after he was starved to the brink of death, then dumped down an apartment complex trash chute in Newark.

The proposed law revises penalties for animal cruelty, toughening both civil and criminal penalties for abuse and neglect. Photographs of the emaciated dog with the big haunting eyes that accompanied his story  rallied activists and the general public to the cause.

The bill increases to crimes of the fourth degree the offenses of depriving an animal of necessary sustenance, or abusing an animal, and it increases the grade of these offenses to crimes of the third degree if the animal dies as a result of these acts.  The civil penalty for these offenses will also be increased under the bill to a fine of $1,000 to $3,000 for a first offense, and $3,000 to $5,000 for a second or subsequent offense.

The bill will additionally increase the criminal and civil penalties for  inflicting unnecessary cruelty upon a living animal or creature by any direct or indirect means, unnecessarily failing to provide a living animal with proper food, drink, shelter or protection from the weather, or leaving it unattended in a vehicle under inhumane conditions. The criminal penalty will be increased to a fine between $500 and $2,000, imprisonment for a term up to six months, or both, at the discretion of the court. If an animal is killed or dies as a result of one of these violations, or the person has a prior conviction, the person will be guilty of a crime of the fourth degree.  The civil penalty recoverable will be a fine of between $500 and $2,000.

Court ordered restitution to the animal’s owner will include the monetary cost of replacing the animal, plus any costs for food, shelter, veterinary care, euthanasia, if necessary, or other costs.

The bill was sponsored by Senators  Tom Kean Dick and Codey. It heads to the Assembly for consideration before it becomes law.

Senator Kean said in a statement after yesterday’s vote, “How someone treats animals in their care is a window into his or her soul. Caring for an animal comes with basic responsibilities that include finding a safe, humane environment for that animal if you cannot or do not wish to care for it any longer. Patrick’s Law will make the penalties for those who shirk those responsibilities appropriately more severe.”

A significant aspect of Patrick’s Law is its recognition of extreme neglect as an act of cruelty comparable to any other.

Patrick, called a miracle dog, recovered and continues to thrive.