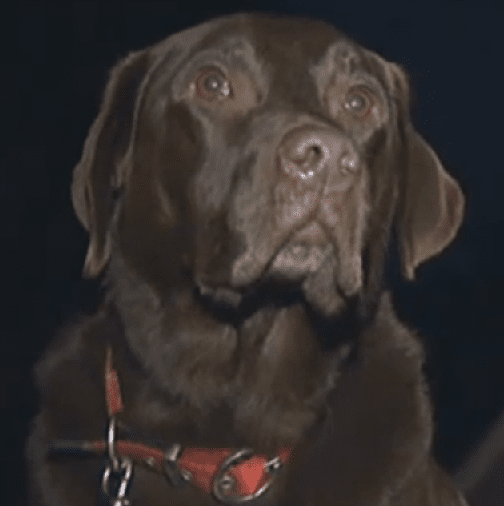 Emergency crews in Burlington, Massachusetts rescued a dog stuck on the roof of his house on Tuesday. People driving by spotted the dog and called 911 for help.

Jeter, a 7-year-old chocolate lab, was recently adopted by Jen Scannell. Tuesday was the first time she left him home alone. Jeter managed to break through a second floor screened window and ended up on the roof. People driving by saw the dog and called for help.

When officers received the call about a dog on a roof they thought someone was pulling a prank on them. Jeter was really on the roof though and the first police officer to arrive on the scene needed back up to get Jeter down. “We needed a ladder and someone who handles dogs regularly,” said Officer Mark Driscoll.

Canine Officer Joe Papsedero was the man they needed. Papsedero normally works with drug-sniffing dogs and this was the first time he’s ever had to rescue a dog from a roof. “I climbed up on the roof and grabbed the dog. He was scared, petrified, he was shaking all over. As soon as I started to get up on the roof, he actually came right over to me. He wanted down,” Officer Papsedero said. He helped Jeter go back through the busted window and get safely into the house.

Scannell rushed home when she got word about the situation. She was relieved to find Jeter safe and inside. She plans to take Jeter to work with her from now on.