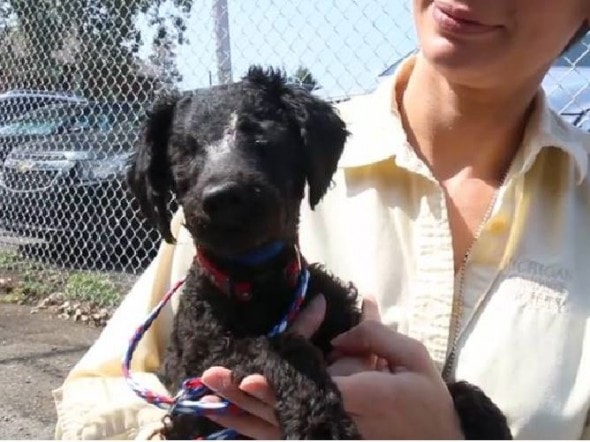 Blinded dog found with maggots in eyes is rescued and recovers, and is ready to begin a new and better life

“Neglect” and “abuse” are not strong enough words to describe the condition that Noah, a 9-month old Poodle mix, was in when he was found on the streets of Detroit.

With possible chemical burns to his face and infested with maggots on the inside and outside of his body, it is clear that this sweet pup was left to die.

Probably making a last ditch effort to escape the pain, hunger, and insects eating him alive, Noah made it out into the street where someone noticed a whimpering dog walking into walls and trees. They called the Michigan Humane Society Rescue department who brought him to the Detroit Center for Animal Care.

At the shelter, Noah was immediately seen by MHS veterinarians. His condition was worse than first expected. They got to work right away shaving his fur and cleaning the wounds that had become home to maggots. His eyes, perhaps intentionally burned with chemicals, were too far gone to save. Both had to be removed.

His recovery wasn’t easy and he had to learn to navigate his way around the world again, but Noah is a happy, healthy and sweet little pup once again. He is still recovering from his surgery in an MHS foster home but will be ready for his forever home soon!