When eight-year-old Rachel Mennet from Summerville, S.C., heard that Iraq War veteran Nick Bailey and his dog Abel needed help raising funds to send the German shepherd to service dog training school, the little girl decided to help. This inspiring young child set up a lemonade stand in a pet shop to help Bailey raise the $6,000 he needed to pay for Abel’s training. 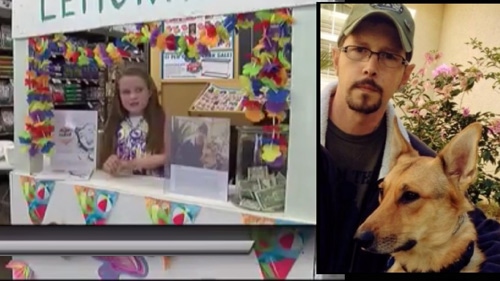 The ex-military man served two tours in Iraq, but after getting hit with a mortar round he was left with mobility issues and PTSD. Bailey’s close bond with his dog has allowed the former soldier to cope with war’s mental scars and stressful situations in his now civilian life, but having a service dog to helping cope would make the veteran’s life a lot better.

Bailey and his wife Vanessa know they could get a service dog, but instead of getting an already trained service dog – a second pet for the family – they opted to take advantage of the existing close bond between Abel and Bailey and send their German shepherd through training school. However the cost of this training is one the family can’t afford, and many organizations have denied them help because the veteran’s conditions is not as severe as in other soldiers.

Mennet learned of the family’s troubles and wish, and she stepped up to help them.

“For me, it’s just amazing that an eight-year-old girl would show any interest in me or my dog,” Bailey told WXII 12 News.

Local residents happily visited the pet shop and donated money through Mennet’s lemonade stand, but the majority of the donations have been collected online.

Donations have exceeded the $6,000 goal, but anyone willing to donate can do so here.

Thanks to Mennet’s kind actions Bailey and Abel are getting their wish.