The ASPCA, in conjunction with the NYPD Vice Enforcement Division and Bronx District Attorney’s office, is assisting in the removal, forensic evidence collection and on-scene documentation and sheltering of 50 dogs seized from a dog fighting operation Thursday afternoon at 1254 Sherman Avenue, a six-story apartment building in the Bronx.

Raul Sanchez of the Bronx was charged with animal fighting, a felony. Other related charges may follow.

Many of the dogs, which range in age from 12 weeks to five years, exhibited injuries indicative of fighting. They were living in a windowless basement, which included a makeshift arena with estimated capacity for 100 spectators. Also recovered were a loaded .25-caliber handgun, 22 crude wooden cages, multiple pet carriers, U.S. currency, and paraphernalia associated with dog fighting, including dog treadmills, harnesses, muzzles, syringes, and a shopping cart full of raw chicken parts. 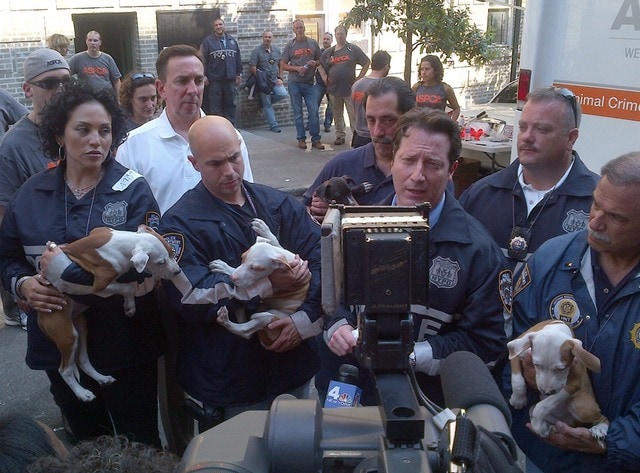 “Organized dog fighting is a brutal form of animal abuse where dogs are exploited and forced to fight as their owners profit from their torture,” said Howard Lawrence, senior director of operations for the ASPCA’s Humane Law Enforcement department. “The dogs we saw today exhibited scarring and injuries consistent with fighting dogs. The ASPCA is determined to protect New York City’s animals from this form of cruelty.”

A search warrant was executed Thursday afternoon for the removal of the dogs. The dogs are being transferred by the ASPCA to a temporary shelter for further evaluation by the organization’s emergency response medical team.

In addition to removing the animals and collecting evidence, the ASPCA is providing legal support to the Bronx district attorney’s office to help prosecute the case.

The investigation is continuing