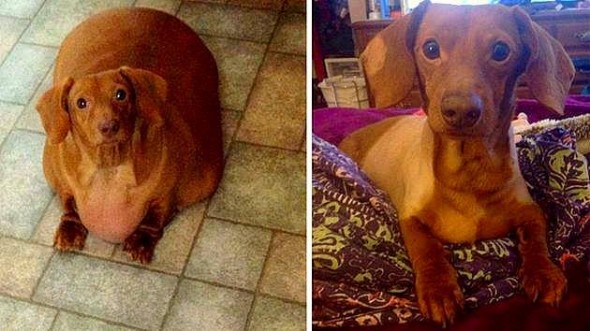 After living on a diet of almost nothing but fast food intended for humans, a dog from Ohio is on his way to a much healthier weight.  His new family has taken him off the “White Castle” diet he was on and as you can see, Dennis is about half the size he started at.

Dennis was a massive 56 pounds less than two short years ago.  That’s the normal for about for to five dachshunds, not one.  The before and after photos are a sure sign of what the poor guy was going through.

His head did not at all look right for his large body, and most of the time, he didn’t really sit so much as rest on some rolls.  Dennis couldn’t take more than a few steps without being out of breath, and things just didn’t look great for a dog in his condition.

Enter Brooke Burton.  She is a relative of the person that was feeding Dennis his steady diet of White Castle burgers.  When she first laid eyes on Dennis she was overcome with emotion, and immediately persuaded her relative to allow her at adopt him.

“Out walks Dennis, and I couldn’t believe it,” Burton says. “I wasn’t even sure what breed of dog he was supposed to be because he was so large.”

She put him on a more regimented system of dry dog food with many regular walks and lot and lots of good old fashioned love and affection.  The change in Dennis took a little time, but it was definitely noticeable.

Dennis is now six, and is down to 20 pounds.  He happily chases squirrels in his backyard, and is looking leaner than ever.  He lives with three other rescue dogs and his new human mom.  Things seem to be getting much better for Dennis.

“In the beginning, you could tell he was very depressed, that he really didn’t feel good at all,” Burton says. “He didn’t have much of a personality. After he lost weight, this bossy little demanding man popped out. He’s into everything, he wants to play with everybody.”

When Dennis started his new diet, he began losing weight very quickly, which left a bit of an issue.  He began having loose skin that was getting in his way while he was walking, so he had to have some of it surgically removed.

He was brought to Dr. Kathleen Ham, a vet surgeon, who helped Dennis regain mobility by removing the loose skin rolls tripping him up. Dr. Ham says this is a good lesson for pet owners who might feed their pets too much.

“We have an expression: food is not love,” Ham says. “Most of what your pet wants from you is affection and attention.” 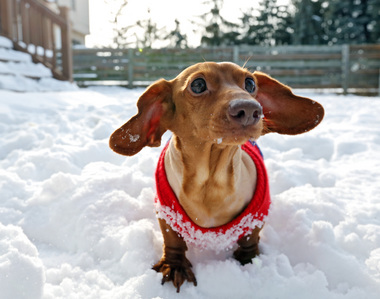