The town of Sturdivant, Missouri is entertaining a strange and adorable pair of traveling pals. 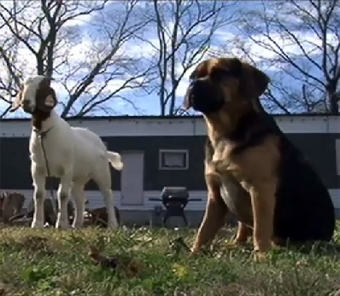 The mysterious nomads landed on the doorstep of William and Stephanie Tackett and seem to have settled in for a brief stay. “My husband heard them behind the cars,” said Stephanie. “He came in quick and said we’ve got a goat and two dogs and I told him we don’t have a goat!”

Stephanie Tackett said the two had a third companion – another dog who left without warning. The two remaining visitors are best friends, and will not be separated. She said they sleep together at night and call for one another when out of eyesight.

“That goat is the nicest goat,” said Stephanie. “He loves to have his horns rubbed!” She’s nicknamed them: the goat now answers to Billy Bob Thornton; the dog has been temporarily named Buddy.

Officials say this is not the first time this cute pair have been spotted on the run, but nobody has the first clue where they came from. “The people over at Greenbrier said they were on the porch Saturday morning,” said William.

The couple are hoping to find the owners of these inseparable friends, but local shelters and the Sheriff’s department are unable to account for their origin.

4 thoughts on “Odd Couple: Mystery Dog and Goat on the Run”