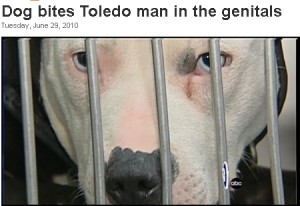 Yes, I know this is rather bizarre and troubling. You can’t help but feel for the victim. In an interview with 13ABC TV, the victim’s family told reporters they were upset that the dog had ripped off his genitals. Hell.

What I’m here to point out is just what an asshat Dexter Clark is for letting his dog run free on the streets of Toledo. In the interview he clearly acknowledges a history of violence with the dog. Two priceless quotes:

“Yeah, he’ll attack any human being that will raise a foot or anything. You can’t throw no bottle at him or nothing.”

And how would Dexter know this? An educated guess? Do you think there is any chance a dog who has bottles thrown at him just might eventually get a little peeved and, oh I don’t know…bite someone?

“I feel like it’s something that’s going on with him because wouldn’t have just attacked like that. I know him.”

Please see your first quote Dexter. And have mercy on those of use who possess an iota of common sense: please don’t ever get another dog.