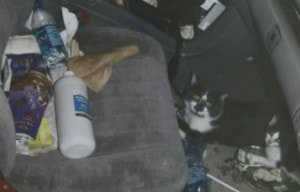 Lori Pellin, 39, is charged with two counts of animal abuse after police say she left 25 cats and two dogs inside a hot car while she went into a casino in St. Charles on Sunday afternoon. A casino guest spotted the Chevy Lumina and called police. They responded in time and the animals all survived. They are being cared for by St. Charles Animal Control and should be available for adoption in a couple days.

“The temperature was probably in excess of 90 degrees and we’re very fortunate that the witness stopped and called the police,” said Lt. Mike Akers, St. Charles Police.

Pellin told police that she became homeless three days ago and had no where else to take her animals. She said she went to the casino to use a computer to look for an apartment.

“She also indicated she wanted to do a little bit of gambling,” said Akers.

He hopes others will remember to plan ahead when they take their pets somewhere and never leave them in a hot car. The St. Charles City Animal Control is looking for donations to help care for the extra animals. Call 636-949-3395 if you wish to help.

There is one twist to this story:  one of the dogs was microchipped, but came back registered to a different owner. That owner has been contacted and her lost dog is about to be returned.