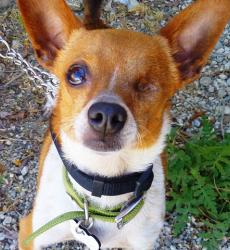 A little Chihuahua mix is on the path to a better life after getting the help and appreciation he needed and deserved from a California rescue group.

Odin was born with a serious eye condition that caused him constant pain. Previous owners didn’t provide medical care so unfortunately his condition worsened. When Odin finally ended up at the shelter, he was blind in one eye. New Leash on Life a Newhall, CA based rescue pulled Odin from the shelter knowing his days were numbered there and the likelihood of being adopted were nearly impossible in his state.

After the removal of his eye, Odin is now showing his true personality. That of a loving and loyal dog.

“It turns out that per our vet’s analysis, Odin seems to not have been born with a lens on his left eye. He had likely been in a lot of pain for most of his life and his eye eventually developed glaucoma. Because he was in so much pain, it was recommended that Odin’s eye be removed immediately.

“Now that this sweet Chihuahua is starting to feel better, he is beginning to show his true colors. He can’t get enough of playing with toys, snuggling in your lap and following you everywhere you go! He’s extremely playful, seems to like other dogs, and is very smart. Odin also knows how to turn on the charm, especially when he stands on his hind legs and flails his front legs frantically to attempt to get what he wants. This little guy will you keep you entertained for the rest of his days!”

Odin’s adoption listing can be found at the New Leash on Life site.