A playful Labrador from Columbia City, Ind., found himself into deep and frigid trouble, after he ventured on to the frozen Cedar Lake and fell through the thin ice. Thankfully, neighbors and first responders came together to help save the pet.

Nancy Thrush was shoveling her driveway on January 6, 2015, when she heard frantic dog yelps. She walked over to the lake in her backyard and spotted Bo in the middle of the icy lake, struggling to get out of the freezing water. 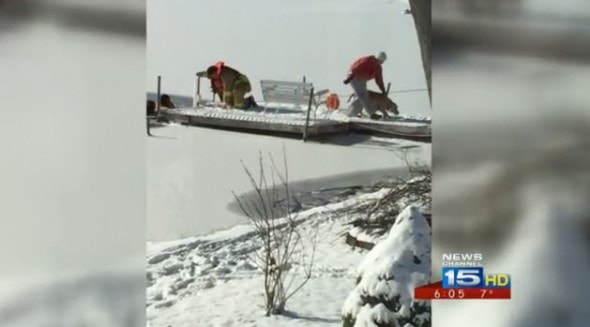 Trush called 911 immediately, but before help arrived, off-duty firefighter and neighbor Amy Biggs, jumped in the lake equipped with a Kayak and dog line. Biggs attempted to rescue Bo but was unable to get him out of the water. Minutes later, the Thorncreek Township Fire Department and DNR arrived at the scene and helped bring the pet to safety.

Rescuers broke the ice creating a channel leading to the docks. As soon as Bo saw the open water, he swam to towards the dock where firefighters were waiting to pull him out of the frigid water.

The dog was wrapped in heating blankets and transported to Whitley County Humane Society where he was scanned for a microchip. Thanks to the implanted chip, Bo was reunited with his owner and as soon as the dog was dried off and checked by a vet, he was free to go home.