Sergeant Jon Levi of the Rutherford County Sheriff’s Office in Tennessee was in the right place at the right time when a call came in about a house fire.  Risking his own life, Levi rushed in and pulled an unconscious dog from the home, and didn’t hesitate to give her mouth-to-snout, saving her life.

Levi was in the neighborhood when he received the call about the house fire, and he was the first to arrive.  He dashed into the smoky house and called for Abby, but she didn’t respond.  He located her with his flashlight and found her unconscious in her kennel.

“I just reached in and grabbed the dog and got the dog out and it was not breathing,” he said. 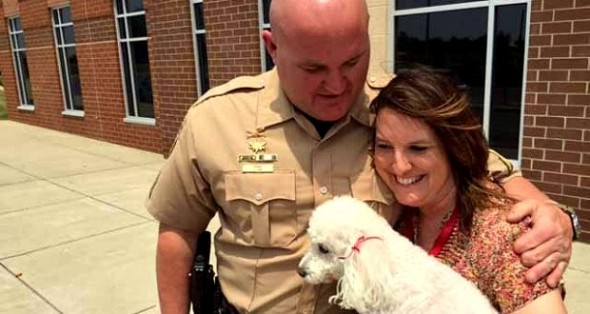 The deputy carried her outside and immediately began pushing forceful breaths into Abby’s muzzle.

“Grabbed it by its muzzle and breathed into it a couple of times, and I felt it tape a gasp of air,” Levi explained.  “It was good. It was neat.  To be honest with you, my first reaction was, ‘Wow. It worked.’”

He felt lucky that it worked.  He said he wasn’t sure exactly what to do, but knew he needed to do something.

The appreciative dog mom gave the heroic officer a donation for his mounted patrol fund, which relies on donations to stay afloat.

The family is staying with relatives until their home is fixed.  Abby has a raspy cough, but is expected to make a complete recovery.