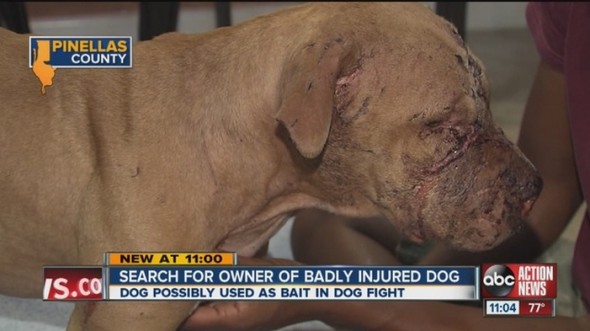 Tomeka Collins came across a site no dog lover ever wants to see.  While traveling near Dr. Martin Luther King Junior Street and 15th Avenue in St. Petersburg, Florida, she came across a dog that was very badly injured.  She got the dog immediate medical attention, and is now trying to help locate the dog’s family, or at very least an answer to what happened.

“I think he probably lost his last fight, so they left him for dead,” said Tomeka.

She suspects that the dog may have been a part of a local dog fighting ring.  It is not at all uncommon for dogs that lose fights to be left for dead, if not killed outright.  Seeing the dogs condition, she took him to the Pinellas County Animal Services.

In a press release, Doug Brightwell says the dog will require a great deal of surgery and therapy.  Brightwell is the interim director of the county animal services.

“It’s been a long while since we’ve been able to find an active fighting ring, but we find a fair number of scarred dogs, abandoned and wandering strays on the streets,” said Brightwell.

Right now, things don’t look good as far as finding those responsible for doing thins to the poor dog.  In a lot of cases, it’s very difficult to prosecute anyone possibly involved.  The extremely secretive nature of these dog fighting rings leave little to no evidence behind.  Without a large scale investigation involving lots of people, time and money, these cases are rarely solved.

“It’s a horrible activity and the dogs don’t deserve it,” said Brightwell.  “The community doesn’t deserve it.”

Tomeka is staunchly against any form of animal cruelty.  She especially against dog fighting ring, and is determined to see it put to an end in the United States.

“Even a couple dogs saved is better than nothing,” she said.