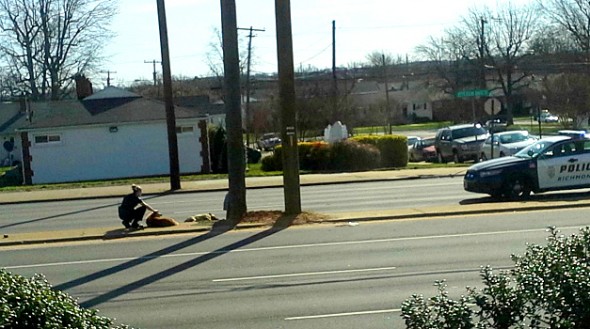 A Virginia dog whose companion had been struck and killed by a car sat in the middle of a very busy street, mourning the loss of his friend.  Richmond police officer Karen Spencer-Boyles stopped to comfort him, protect him and stay with him until he could be picked up and taken to a shelter.

“The one thing about dogs, is they’re always there for you,” the officer said.

And she was there for one dog who needed a friend and a protector more than anything at that moment.  His friend had been killed by a vehicle and was lying in the middle of Jeff Davis Highway.  He refused to leave the other dog’s side, and was risking his own life to hold vigil.  The officer escorted them to the side of the road.

“You could just tell he was scared,” Spencer-Boyles said. “He just looked helpless. It’s kind of like if you had a friend and your friend had been hurt. He just kinda stood by his friend.” 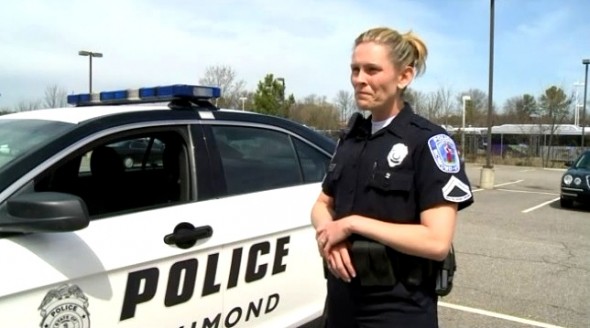 A woman working nearby saw what the kindly officer did, and snapped a photo.

“A Richmond city police woman stopped because a dog was hit and his friend was beside him barking,” Michelle Carrington said. “She stopped and got him out of the road and soothed him.”

Spencer-Boyles stayed by the dog’s side, soothing him and keeping him company.

“And as long as I loved on him, he wouldn’t get up, but he stayed right there with the other dog.  If I wouldn’t have stopped, he probably would’ve gotten hit.”

She knows how it feels to be an owner in this situation.  When she was in the police academy 13 years ago, she got an English Cocker Spaniel named Tex.  In 2009, Tex ran out into the road and was struck by a car.  A passerby saw what happened, and stopped to save him.  Spencer-Boyles knew how important it was to pay the good deed forward. 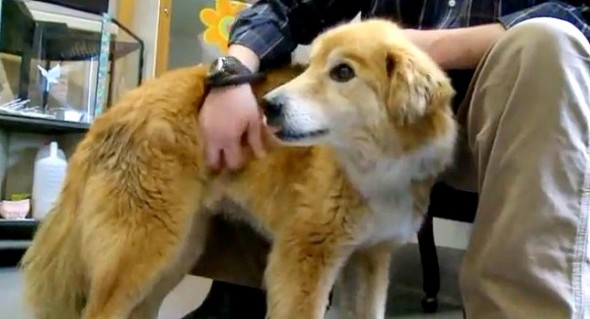 Richmond Animal Care and Control came to collect the grieving dog, who is being called Guiseppe.  It is believed that he does have a family, because he is neutered and was wearing a flea collar.  His family has 10 days to claim him before he is put up for adoption.  Anyone who knows who this boy is should call (804) 646-5573.

Officer Spencer-Boyles hopes stories like this will encourage more people to microchip and have pets spayed and neutered.

“We see so many animals that are just roaming the streets, [that] don’t have any families and don’t have anybody to take care of them,” she said.

We’re just grateful there are officers like this woman who do care about the animals.

“For her to stop and take a moment of her time to show just a little compassion to an animal that obviously just lost his best friend goes to show us there are some people out there that really do care,” Carrington said.