Healdton, Oklahoma Police Chief Zac Brown says two of his officers went well above and beyond the call of duty when they executed a risky late night rescue mission, saving more than a dozen shelter dogs from raging flood waters. 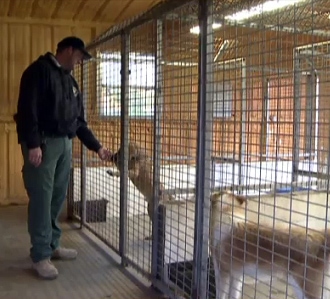 Healdton Police Officer Tim Woodruff and Sergeant Brian Walker were roused by a 3:00 a.m. phone call Monday night alerting them to the fact that several dogs held at the city pound were trapped in the flooding building after a downpour flooded Carter County. The officers grabbed a canoe and paddled to the shelter as quickly as they could.

When they arrived, they fought their way through chest high water that moving fast enough to sweep them off their feet. The two men struggled to find their way to the kennels and managed to free 14 dogs. Sadly, five had been lost.

Despite the praise of their superior, Woodruff and Walker say they were just doing their jobs. They say doing whatever they can to keep anyone from harm is just part of their duty, and they could not fathom the idea of the dogs suffering such a traumatic death.

“You don’t want dogs or anybody drowning in a death like that. So that was our only concern at the time was getting out here, and getting them to safety,” Woodruff said.

“They can’t do much when they are caged up. Unfortunately we can’t let them run free. You know we put them in the cage so it was our job to get them out,” Walker said.

7 thoughts on “Officers Risk Safety to Save Stranded Dogs”