Officers Save Puppy from Abuse and Arrest Owner 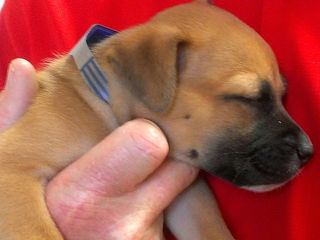 A Cincinnati man was arrested by two police officers after maliciously slamming a puppy to the ground. The incident happened right in front of a police station, and was seen and stopped by officers on duty.

Miles B. Howard harshly yanked the dog up, yelled at it, and threw it to the ground.

“The officers ran up and one stopped Mr. Howard and the other protected the puppy. He told them, ‘It’s my dog, I can do whatever I want to with it,'” said Lt. Joe Richardson.

Not according to the officers. The boxer-shepherd puppy, who suffered a few scratches to the top of its paws and under its chin, was confiscated and turned over to the Cincinnati SPCA to be cared for.

“We see some rare stuff, and we rarely see animal abuse. It rarely happens, but we see it, and to have it occur in front of the police station, it makes you think what’s the man thinking,” said Richardson.

Howard was arrested and charged with animal cruelty. It will be up to the court to determine if the puppy will be returned to its abusive owner or be placed for adoption to a loving family.

“He told the officers he was training the dog. I don’t know about a 49-year-old man, but my 3-year-old granddaughter knows you don’t throw puppies to the ground,” Richardson said.