Officials in Dubois County, Indiana came to the rescue of a Sheltie mix on Monday night that was left out in the freezing temperatures. After receiving an anonymous tip police arrived on the scene to find the dog frozen to the ground as temperatures dipped below zero.

An anonymous call was made to the Dubois County Sherriff’s Office late Monday night informing them about dogs that had been left outside in the cold in Jasper, Indiana.

Deputies followed up on the anonymous tip and found two dogs left out in the harsh conditions. One dog was in the yard on a leash and the Sheltie mix dog, named Peanut, was found inside a dog house. 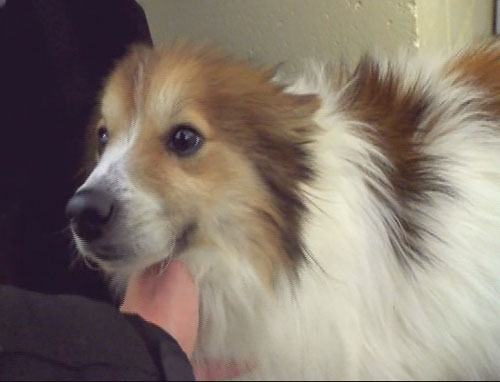 “A barrel-style dog house. But it was not, certainly not appropriate for the temperatures we had last night,” said Stuart Wilson of the Dubois County Sheriff’s Office. “The dog, its stomach and feet and tail had frozen to feces that was in the pen. They took warm water and poured it over the dog to free it from the floor.”

Peanut was then taken to Dubois County Humane Society where he got so much needed care, including a bath and flea treatment. Peanut is about half of the weight he should be according to the Dubois County Humane Society, but they expect him to make a full recovery. They have already received several requests to adopt him and once he is healthy they will place him in a good home.

No charges have been filed against Peanut’s owners yet, but findings from the investigation will be sent to the prosecutor’s office for review.

18 thoughts on “Officials Rescue Dog Frozen to the Ground”