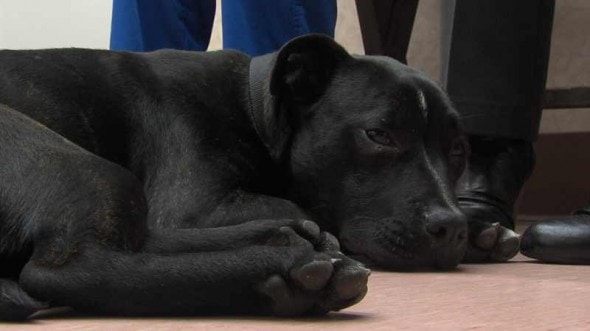 Officials are on the hunt for the individual responsible for spilling a bag of dog food into the middle of a Virginia intersection, which may have caused a dog to be hit by a vehicle.  Fortunately he is recovering.

On Friday night in Lynchburg, Virginia, it seems a hungry black pit bull was lured into the road for what he thought was a free meal, but he got something much worse.  Sergeant Karen Wilson was first to arrive on the scene.

“The animal was laying over on the side of the ditch, near the ditch line,” Wilson said.  “He was there, he was trembling, he was shaking.”

She is certain that the food was placed there intentionally.  Some might conclude that the bag could have fallen out of a vehicle, but there was no packaging on the street – just food.

“It was evident that it had just been put in the middle of the roadway and it was left there for the animal to get,” she said.

He had no tags, and there didn’t appear to be anyone missing him, so Wilson called him Jax.  She inspected Jax for injuries.

“His rear leg on that side he couldn’t walk on it, he was limping so he possibly had some injuries to his leg and possibly to the hip area,” Wilson said.

One of his eyes also appeared to be damaged.  Jax was taken to Altavista Animal Hospital to be cared for by Dr. Sandra Bullins.  She believes that despite his close proximity to the scene, something else took place.

“He had several wounds to his right eye and a wound to his left chest,” Bullins said.  “I really feel like he probably was involved in a dog fight instead of being hit by a car.”

After undergoing surgery on Tuesday, Jax is expected to make a complete recovery.  It may be possible that he was in a dog fight, and was then abandoned in the road. Sgt. Wilson and other officials are currently searching for his owner, as well as whomever is responsible for leaving the food in the street.  Anyone with information is urged to call the Campbell County Sheriff’s Office at 434-592-9574.