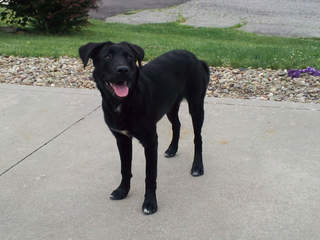 Car crashes can be very traumatic for humans, and sometimes more so for dogs.  Evidently this was the case for Rosco who went missing after the car he was riding in crashed in Parma Heights Ohio, injuring it’s 3 passengers.  It’s been nearly 2 weeks, and Rosco’s family desperately wants to find him.  The crash happened after school on Nov. 13 on Kingsdale Boulevard near Tiffany Lane.

The girls, who took Rosco everywhere with them, were out picking up a snack at a local McDonald’s when the tie rod on their jeep broke and caused them to lose control of the vehicle.  The mother of two of the girls, who is also Rosco’s owner is Irene Wachsman, says her daughters are recovering but their best friend remains in hospital with a head injury and she also needs jaw surgery.

“We have searched, placed flyers, checked shelters and police stations in surrounding areas. There have been sightings of him, but no luck in bringing him home,” said Wachsman.  “We’ve been searching for Rosco every day, hoping to find him, but we haven’t had any sightings since Friday and we’re just so sick over it.”

Rosco was last seen on Friday near the creek on York Road by the Drug Mart. It’s near the Tri-C campus and he was not wearing his collar at the time of the accident.  He is medium in size and black in color, with a distinct fluffy/curly tail, a white chest and white on the toes of his paws.

The family is offering a cash reward to whoever finds Rosco and helps the family bring him safely back home.  If you see Rosco, please call Irene at (216) 323-3718.  Rosco’s girls miss him very much and would be very grateful to anyone who can help bring him back.