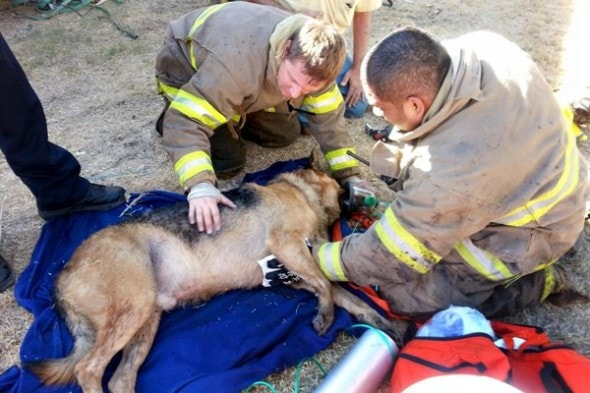 A man lost everything when his home went up in flames. He thought he was going to lose his best friend Booger too, but firefighters were able to rescue and revive the German Shepherd.

On Monday afternoon a fire broke out engulfing the man’s home in Yuma, Arizona.  James Kookookthe was at a nearby home visiting his cousin when he said he heard a loud “pop”. “When I opened the door I saw flames licking up the side of his friend’s trailer,” Kookookthe said. Once Kookookthe saw that the man was alright he tried to help extinguish the fire but wasn’t able to. “I ran around the side trying to call his dog, but his dog wouldn’t come out,” recalls Kookookthe.

Luckily firefighters arrived on the scene and were able to pull Booger out of the fire. “The dog was found in the back bathroom. The room itself was full of smoke, but was not on fire,” said Charly McMurdie, a spokesperson for the Rural/Metro Fire Department  They spent several minutes trying to revive him. They administered breathing treatments and gave Booger bottles of oxygen. Thanks to their efforts Booger is alive. He was rushed to the Desert Veterinary Clinic where he is in critical condition.

The company that makes an emergency kit to treat pets for smoke inhalation, the Fetch Foundation, is donating $500 to cover vet expenses. Booger’s owner is unable to afford the vet bills. Anyone else wishing to help with Booger’s treatment can donate to Desert Veterinary Clinic in Yuma by calling 928-783-5010.