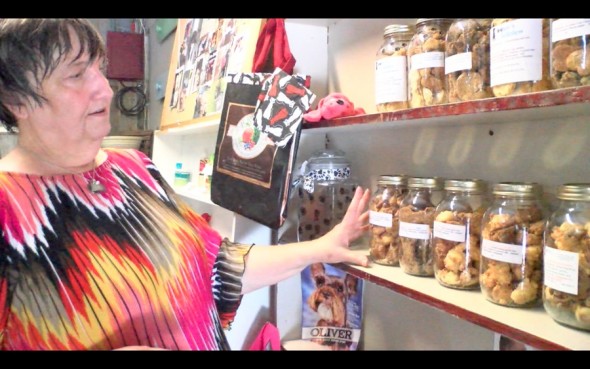 A woman from Broken Arrow, OK is taking measures into her own hands when it comes to the ongoing investigation into possibly contaminated jerky style dog treats by the FDA.  After her dog passed on after consuming the treats, she wants to help other families avoid the same sad situation.

Debi Lisle’s Labrador retriever, Mocha Marie unexpectedly got ill and died back in February of 2013.  What makes it so strange is the fact that the dog was given a full medical examination and passed with flying colors.

“She was just bigger than life,” Debi said of Mocha.  “She was like a four year old, into everybody’s business, and everybody that met her loved her.”

Debi believes it was after ingesting jerky treats made in China, the very ones under investigation by the FDA due to reports of vast amounts of sickness and death following owners feeding these to their dogs, are what caused Mocha’s death.

“When she died suddenly, I just started investigating.  That was the only thing different in her life, the treats,” said Debi.

After losing Mocha, Debi adopted Cooper.  Cooper is a Great Dane-Labrador mix, and has 11 food allergies.  Talk about your diet restrictions!  Cooper’s sensitive digestive tract had given Debi the idea to make him special treats herself.  What started as a batch of doggie cookies, has become a full blown business plan, made out on a napkin with a friend.

“By the end of dinner we had it all planned out on a napkin, and that’s how Cooper’s Kitchen got started.”

Debi says that the treats are gluten and preservative free, unlike the ones from China under investigation.  Debi only uses locally sourced ingredients straight from the same places she sells her treats.

“The only thing that I buy that’s not grown here in the United States is the cinnamon, and I buy Colombian cinnamon, which is supposed to be the best you can buy,” she says.

Debi plans to open a pet bakery somewhere, very soon.  August will mark one year since the start of Cooper’s Kitchen, and she has been quite successful.

“These animals deserve a safe and healthy treat,” she said.  “All I want for Cooper’s Kitchen is to get the word out there that pet parents, you do have an alternative.”