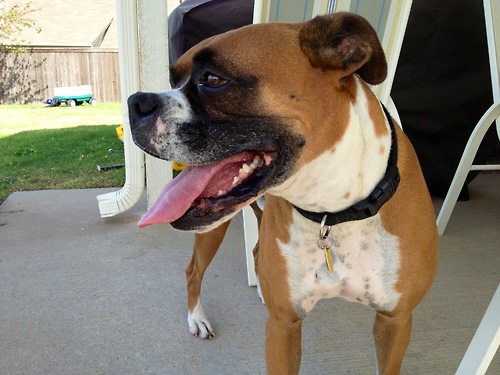 Every so often, Red Cross calls for blood donations and we answer.  But humans aren’t the only ones helping save lives – dogs are, too.  Winston is one boxer that gives more than his share to help dogs in desperate need of blood.

Winston wasn’t always a hero.  It wasn’t so long ago that he was in need of being rescued.  In 2008, he was discovered in Oklahoma, starving, infected and with what looked like acid burns covering his back.  He was adopted by a family who had a big yard and plenty of love to give.  His appearance scared the kids at first, but they soon saw how friendly and playful he was.

Now that he’s healthy, he gives back to the community.  Every few months, Winston goes to the vet to donate blood.

“Boxers are the universal blood donors for dogs,” said his owner.

Recently, a Yorkie named Barkley needed Winston’s services.  Barkley underwent surgery to remove his enlarged spleen, which helps produce blood.  He lost much of his, but Winston was there to provide his own blood to the ailing dog.

“Now he’s going to have a little bit of boxer blood in him,” said Barkley’s owner.  “It’ll be interesting to see if he thinks he’s a little tougher.”

Thanks to the kindness of Winston’s new family, and their generosity to others in need, many dogs’ lives will be saved.

“We couldn’t imagine life without him now,” said his mom.