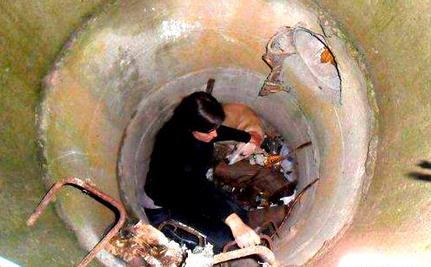 Elena Trofimenko started out her Friday journey to work as she would any other – passing by street dogs gathered near a bus stop.  She noticed one in particular who was wearing a collar and wagging its tail.  Street dogs are common in Ukraine, and this one seemed like any other.

A distress call was placed to the FRIEND Animal Shelter later in the day, with witnesses reporting that a dog was at the bottom of a 10-foot deep sewage drain.  It is unknown whether he fell or was pushed, but no one from any of the city departments would come help.  Many people passed by, but no one paid much attention or was willing to go into the sewer just to help some street dog.

A couple volunteers showed up that evening to help, Elena among them.  She was shocked to find that the dog at the bottom of the hole was the same friendly-looking dog she had seen that morning.  Another volunteer named Yasmine had a catch pole, and the pair worked together to save the frightened and injured dog. 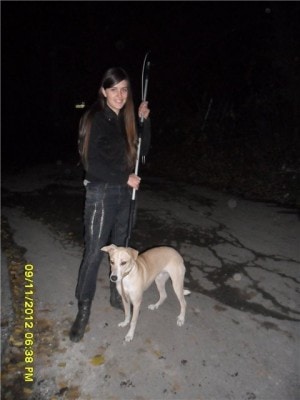 She lowered herself into the drainage hole.  The dog was growling, and Elena did her best to soothe it.  She was also scared – a sewer rat was standing by her feet, and she worried she might get bitten.  She managed to secure to catch pole’s loop around the dog’s neck, and the two women pulled the dog to safety within half an hour.

“What a way to spend a Friday night,” Elena said, as she loaded the dog into her car.  “The boy had a lot of injuries, but overall he feels good.  He is about 7 or 8 months old, very playful and active boy!”

Though he was wearing a collar, it had no tags, and Elena and the FRIEND shelter are searching for his owner(s).  But had it not been for Elena’s kindness and bravery, this dog would have just been another of the many homeless dogs in Ukraine.