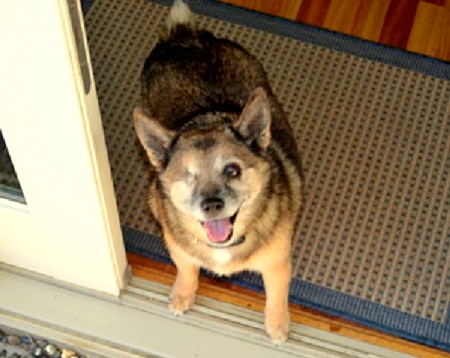 We inherited Chopper from my in-laws who, in a final display of their wicked sense of humor, left us their smelly, obese, geriatric dog instead of a palatial estate.

I didn’t really want him. After all, I had already welcomed three kids, a cat, and my devoted German shepherd mix, Buddy, into my heart and home. There was no room for more.

But the little dog needed a place to live, and given his age and poor health, I figured it would only be for a few months anyway, so I agreed.

When he arrived at our home he was so obese he could barely walk. I immediately put him on a diet and within a few months he was running and jumping. The vet said that I probably bought him a few extra months. Great.

I sincerely hoped that since I’m a dog person at heart, I would eventually warm up to Chopper, but sadly, that was not the case. Months after he joined our family, I was no fonder of him than I was at the start.

Sure he looked like a cross between a hedgehog and a footstool, but that wasn’t the problem. What bothered me was that Chopper didn’t give me any normal, dog-like affection, and there was a blankness behind his eyes… oops, I mean, eye.

My husband shared my disdain, but my kids and their friends did not. They loved Chopper. To them, that stinky little beast was the most wonderful dog on the planet. “Chopper is so cute!” they would often say.

My youngest adored him, so she was the most irritated when I routinely offered Chopper to anyone who came to visit. “He’s on sale today! I’ll throw in a six-month supply of food!”

She got especially upset when I joked about wrapping him in bacon so the hawks might find him more appealing. (I guess I did cross the line with that one.)

My daughter couldn’t understand why I didn’t like Chopper so I tried to explain, “He’s just not warm or friendly, and besides, I already have a dog.”

“Well you have more than one kid and you claim to love us all the same — or is that just something you parents have to say?”

She had a point, so I promised to reform my ways, and reminded her that even though I joked about Chopper, I was the one who was actually taking care of my in-laws’ dog. I fed him, bathed him, and spent what seemed like an eternity at night putting him to bed.

For her sake I made an effort to say nice things about Chopper and I even gave him a cute nickname, “Chop Chop,” hoping that would change how I felt.

But Chopper made my mission more difficult when he started losing control of his bowels and had repeated accidents in the house.

We had to move him permanently outside so we fenced off a part of the yard so he wouldn’t fall in the pool and then crated him on our enclosed patio at night.

A few months later we made another unfortunate discovery. Chopper had started pooping in his crate. Though we’d clean it up each morning, the kids started to avoid him. They didn’t want to pet a dog that had been sleeping in his own poo. Frankly I couldn’t blame them.

It seemed inhumane to let him live out his remaining days in such a manner. Something had to be done.

The vet agreed, and also said that Chopper was clearly in pain. We hadn’t noticed but his constant shaking had gotten worse and the arthritis had spread to his front leg. He was almost completely deaf and blind and his endless pacing was likely a sign of dementia.

We talked to the kids and together we agreed that Chopper deserved to die with dignity. But weeks passed without us taking any action. It was just too hard. Then Chopper developed a tumor on his front leg, making each step incredibly difficult. Finally we made the call.

The little guy must have sensed what was going on because that morning somehow he managed to hobble about the yard looking like he was game to play. We joked that you could probably remove three of his legs and he’d still find a way to get around.

Since I wasn’t feeling well, my husband offered to take him in, but I insisted on going. We would do it quickly like removing a Band-Aid; pay the fee, and don’t look back.

The soft-spoken technician took hold of the leash and asked if I needed more time.

No. You don’t understand. He’s not really my dog, I felt I should explain. But, I petted Chopper goodbye, just the same.

“Come on, let’s go get some treats,” he said as he led him to the back.

I could barely sign my name before I had to turn and run.

“Stupid dog,” was all I was able to say.

We got back home and cleaned out Chopper’s crate, removed the fencing, and packed away the bowl that my eldest daughter made for him so many years ago.

Life would be easier now, I told myself. No more messes, no more vet trips, no more endless goodnights.

Stupid dog. I guess you were mine all along.