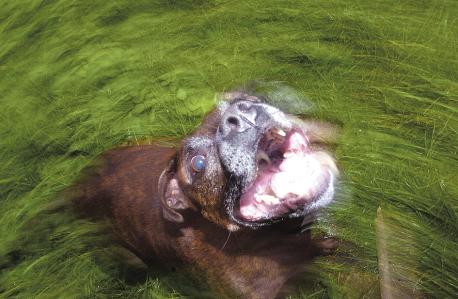 RSPCA inspectors, police, and special dog liaison officers decended on the properties after tips revolving gang activity, and suspected illegal dogs being bread specially for fights.  Dog fighting has been banned in the UK for nearly a century.

Along with the rescued animals, many items associated with training dogs for fighting were also taken into evidence.  Things such as tread mills, electric collars, and medical supplies were all taken from the three homes involved.

A total of four men and one woman were questioned by officers on suspicion of being in possession of fighting dogs.  The men range in age from 21-years-old all the way up to 57, and the woman was reported to be 46.

All animals taken from the property and brought to local kennels, so all dogs could be evaluated and treated for any possible health issues.  Then the specific breeds will be determined.  So far, only one dog was reported to have any injuries, and they were minor.

Detective Inspector Simon Upton said the raids were all about stopping animal cruelty, and removing any potentially dangerous dogs from the East Lancashire neighborhood.

“We take the issue of dangerous dogs and alleged organized dog fighting very seriously and would encourage anyone with concerns to contact us,” DI Upton said.  “Keeping and training dogs for the purpose of fighting is both cruel and dangerous and will not be tolerated in Lancashire.”

The raids were all carried out under section 23 of the Animal Welfare Act 2006 and investigations are ongoing.