Lucky is very aptly named; he might only have one eye, but he has two families. His uniqueness caught the attention of Bobbi Loomis, who also only has one eye, and established a bond between them.

A stage 4 cancer caused Bobbi’s left eye to drop and lose vision. She had squamous cell carcinoma, a skin cancer that struck the left side of her face. One doctor refused to operate on her, instead saying he would do what he could to make her comfortable, while cancer ravaged her face. Dissatisfied with his suggestion, Bobbi sought a second opinion. Doctors at Stanford Hospital & Clinics in California were much more hopeful. In 2009, Bobbi underwent two surgeries that sacrificed part of her vision for her life.

“They looked at me and said, ‘Oh yeah, we can do this,’” she said. “They got every single bit of cancer out. They’re why I’m alive.” 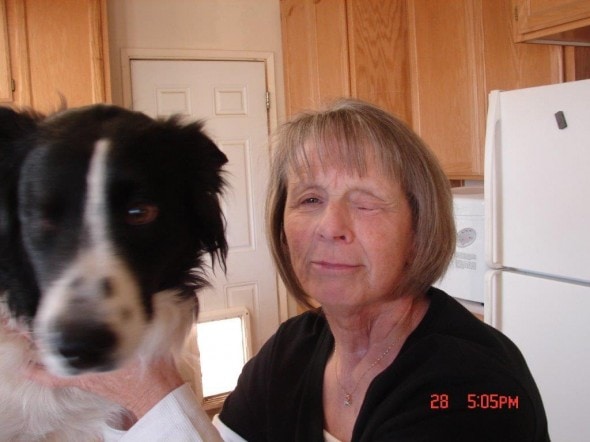 Lucky also came close to death. As a newborn puppy, his mother accidentally stepped on his eye. Doctors were able to safely remove it.

“They didn’t euthanize Lucky when he had his accident,” said Bobbi’s husband Dave. “And thank goodness, because he turned out to be such a great doggy.”

About four years ago, the Loomises met Lucky and his owner at their dentist’s office and instantly bonded with him. Since then, the border collie’s owner has shared custody with Bobbi and Dave, allowing them to have Lucky stay in their Reno, Nevada home for weeks at a time.

“We’re almost like a one-eyed family,” Bobbi said. “I’ve got one and Lucky’s got one.”

Today, Bobbi was due back in the hospital to remove sutures from an operation to keep her eye in place. Along with Dave, she has Lucky to comfort her throughout these procedures. Someday, she may even have her vision restored, and hopefully Lucky will be there to see it.

“What we can learn from Lucky is not to give up on animals just because they’ve got one eye or a leg cut off or something wrong with them,” Bobbi explained.

“I think it’s an absolute inspiration to see animals with disabilities,” Dave added. “They don’t give them a second thought. They just get out there.”