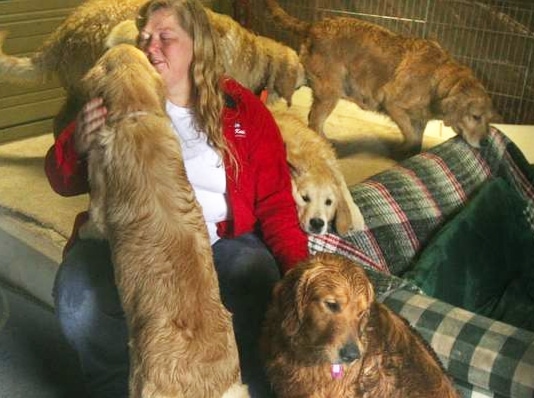 If this doesn’t look like your average shelter, it shouldn’t – animal rescuer Colleen Combs has gone to great lengths to create what she feels is a solution for our nation’s overcrowded animal shelters, and judging by the dogs in her care and feedback from those who adopt them, she’s on to something big.

“I’m the alpha dog,” Colleen Combs said, standing in a room full of dogs that roam freely about the property at King’s Castle. There are with treadmills for high energy dogs, couches for the slackers, throw rugs, TV, and a lot of happy dogs.

And there are no cages in sight. Combs said she believes this model is the future of sheltering: because dogs are social animals, she says they’re happier and healthier when they are allowed to mingle freely. She also believes that it will lead to higher adoption rates.

Using a brilliant strategy to offset expenses, Combs leaves room for a number of dogs to attend doggy daycare at the facility. The socialization is good for occupants and visitors, and customers love the happy environment.

Chef Doug Keane adopted his dog from a Healdsburg kennel. He was aggressive and anti-social, and was facing euthanasia. His time spent at King’s Castle has transformed him.

“He wasn’t mean though. He was afraid and basically he’d been locked up in a meth lab and been picked on. And so, the only thing he knew was people going at him,” Keane said.

Combs believes wholeheartedly that other shelters should follow her example – for the sake of dogs and adopters alike. “If you were looking to adopt a dog and you saw one in this environment, you would know more about that dog and whether it would fit with your family than you would form a dog sitting in a cage,” she said.