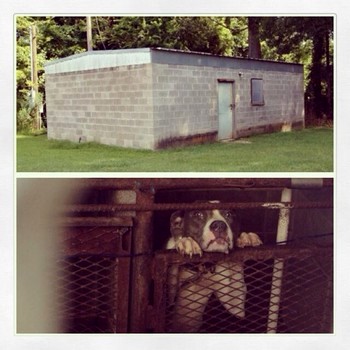 An inhumane animal holding facility in Ellisville, Mississippi has been torn down after an online petition calling for its destruction quickly gathered thousands of signatures.

Preschool teacher Savannah Pipkins started the petition after having seen the cruel conditions the dogs are forced to be kept in.

It was a small building, easy to pass by, but practically an abuse chamber for its inhabitants. It was dimly lit; only two small windows and no ventilation or air conditioning. She did not see water out for two of the pit bulls inside. Dogs sent there were seized or quarantined, living out the last five days of their life in the cramped hut until they were put down. It is even rumored that staff used heart sticks, a very painful and slow method of euthanizing the animals.

“I couldn’t imagine sitting in a building like that for five days waiting to die,” Pipkins said, “so I don’t feel like an animal should have to either.”

Veterinarian Kelly Martin said the city frequently brought animals kept there to her to be put down. Some of the less vicious ones were sometimes kept in her office, or even takes them home and tries to find them foster homes.

“All this is out of my pocket — I feel all of these animals on my own,” she said.

The law says pet owners have five days to claim their animals, but Pipkins isn’t sure how they could find out they were at the facility, because city workers deny access and there is no address listing or label, phone number or sign for the public to see.

Pipkins felt people might be unaware of how the area was handling strays and other animals, mainly pit bulls, which are contraband in Ellisville. Only families outside the city could adopt them, but how could anyone know they were there?

As a proud pibble parent, Pipkins wants to raise awareness to the truths about pit bulls and to change the laws that discriminate against them. Both she and Martin believe that the petition and media coverage led to the demolition of the holding facility.

If you would like to see another inhumane pet center shut down, please visit here.