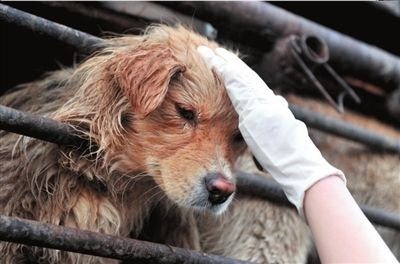 As many know, rules on dog ownership in China are harshly regulated. Dogs were banned entirely from Beijing’s city center until 1983, and currently in place is a one-dog-shorter-than-14-inches-per-household rule. Dogs were not always so shunned in China, and many are working to establish rights for them and other animals across the country.

Recent DNA studies have shown that domesticated dogs very likely originated in east Asia, and they were loved and even treated like royalty in China for hundreds of years. It was not until the Communist era that mentality about dogs changed. They became seen as a symbol of decadence during a time of scarcity, and then were viewed as uncivilized, rabies-spreading polluters.

Dog ownership began to rise when Mao Zedong died in 1976, but the antiquated laws and perceptions about dogs have not been eliminated. Dogs in Beijing are targeted by police who will carry them off in cages to be put to sleep or sold for meat.

But not all police are crazy about China’s crackdown. One officer, who will remain anonymous, is a champion of dogs and has broken the very laws he is sworn to uphold to protect them. He knows that laws are not always just, and has rescued dozens of confiscated dogs over the years.

“My colleagues don’t have any feelings toward dogs,” he said.

He knows what he is doing is “wrong,” and that he could get in a lot of trouble, but risks his career and his own freedom to save lives.

“I ask my colleagues [at the police station] first. But if they won’t give the dog to me, I’ll steal it,” he explained.

He sneaks in at night when there are fewer officers around, and clandestinely removes dogs from their cages and the building. He was motivated to do this after seeing dogs crammed into cages, waiting to die. 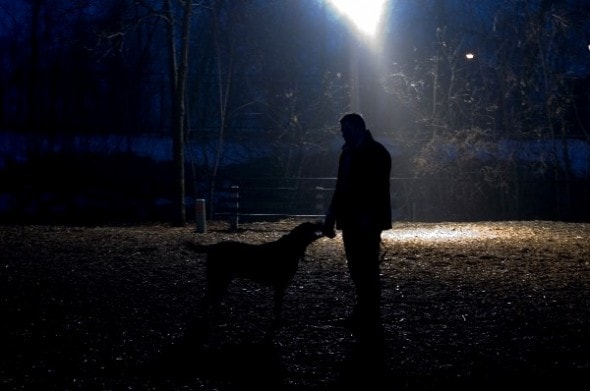 Many citizens violate the laws by owning larger breeds or more than one dog. Most keep them hidden, only walking them in public after midnight, but some are more brazen about their choice to break the laws. Large dogs are illegal because it is believed they will attack humans.

“Just because a dog is big, that doesn’t mean it’s aggressive,” said one Beijing man, who walks his two golden retrievers after dark.

Even small dogs are seized, if their owners can’t afford the costly registration fees. There is an initial 1,000 yuan ($160) cost, as well as a yearly 500 yuan renewal fee.

“Some owners don’t have the ability to pay,” said the officer, pointing at a small golden dog. “This one was taken from an old person living on social security.”

Over 30 million Chinese homes have a dog or cat, and most do not agree with their country’s laws. Fearing for their dogs’ lives, Beijing residents shuttle them to kennels outside of city borders, hoping the severe enforcement will die down and that they can bring their pets home again.

The unknown officer is doing his part to keep dogs safe. He says he has rescued 12 dogs so far this summer, 5 of them being kept at his home, much to the chagrin of his wife.

“The regulations are unreasonable,” he said matter of factly. “If people can afford to raise (more than) one dog, I don’t see why it should be illegal.”

DISCLAIMER: At Life With Dogs, we know that any stories we post about dogs in China are controversial and can incite passionate statements from dog-lovers. But any comments that are viewed as hateful, racist or bigoted will be deleted. Especially nasty or repeated attacks may lead to being banned. Please try to be open-minded about a culture that is slowly changing to view dogs in a positive manner, and do not judge an entire country or culture based on the beliefs and behaviors of some. Remember that while western culture may view dog-eating as barbaric, other cultures may feel the same about our decisions to eat cows and pigs, who are subjected to cruel conditions from birth until they are slaughtered. We do, however, understand that dogs in China are subjected to torture and inhumanely killed for fur, meat and other reasons. We do NOT support this in any part of the world, nor do we support the mistreatment of any living creature. We only aim to show how the world is changing for the better, to promote the respect and care of all animals and to commend those that do.