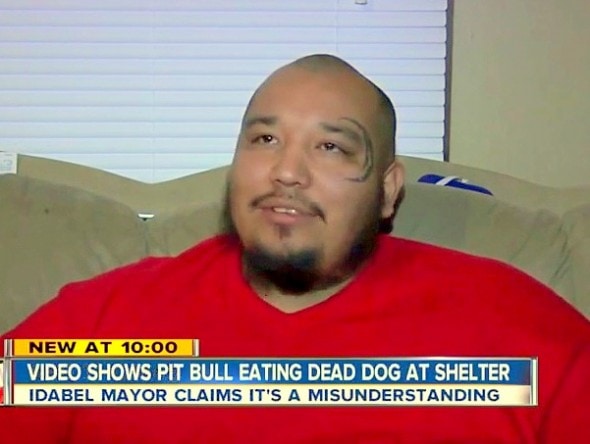 Questions are being raised and an investigation has apparently been launched after a video was posted showing a hungry dog eating the remains of another dog in their shared kennel at a derelict Oklahoma shelter.

Abe Thomas made a 40-second recording of a gray female pit bull picking at the hollowed chest cavity of another dog.  He went to the Idabel shelter on Tuesday to adopt a dog, and was completely horrified by what he saw.

“I couldn’t leave her there, because the dog catcher was telling me, ‘I don’t think she’s vicious,’ and I knew she wasn’t,” Thomas said.  “I told her not to eat the dog, I told her to sit there, and it took him [the dog catcher] about 30 minutes to get there, and she just sat there the whole 30 minutes, didn’t once go touch the dog.  And if she was so vicious, she would have attacked the little dog that was there eating the dog with her.  She never once touched that dog.” 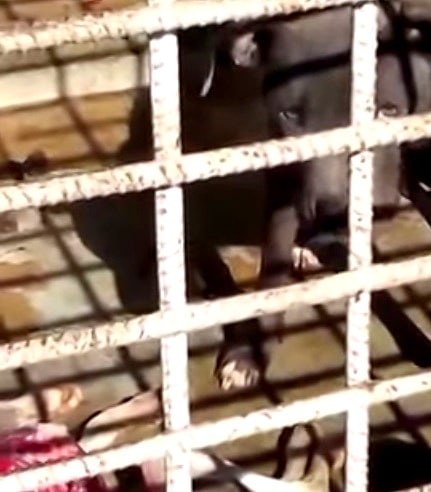 Just looking at her face and behavior in the video, it is easy to tell that this is a submissive, confused, and hungry girl.  Thomas adopted her after the incident, which has been called a misunderstanding by animal control officer Cecil Richards.

Thomas is calling the dog Joy, because “she looked so joyful to be out of there.” 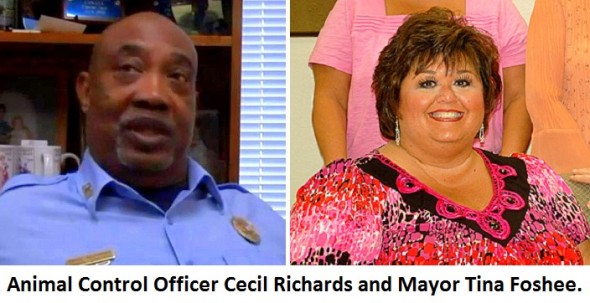 Idabel mayor Tina Foshee said on Wednesday that the town will be investigating the matter.  She has declined an offer of help from Tulsa Humane Society President Gina Gardner, despite reports that the shelter ran out of food around the holidays and hasn’t made much of an effort to obtain more.

“I would feel much better if they allowed us to come down and see what’s going on,” Gardner said. “We’ve offered to vet the animals, and to go in and have a discussion with them, and see if there’s any help we can provide.

“Just for their sake, we’d like to see what exactly is going on. Maybe there’s some kind of protocol they could put in place that would prohibit this from happening.

“I would expect at any rural animal shelter to see things that could be fixed and improved very easily.  We would be coming only to share our knowledge and resources. That’s what we’ve tried to convey to them. We’re not here to take pictures to share around or to judge, but if there are problems there, they need to let us or someone else find out and help them.”

A Facebook page has been started to demand reform at the neglected shelter, in addition to the petition that is calling for Richards’ dismissal.  We do not have the evidence to back up the claims, but the petition page says this is nothing out of the ordinary for this “house of horrors:”

Dogs are dying in these kennels. Freezing to death. Starving to death. Dead bodies laying on the kennel floor for days. The other dogs are so hungry, they are forced to eat the dead dog carcasses to survive. The kennels are completely open to the elements. No heat in the winter, no air conditioning in the summer. Cecil Richards is scared of dogs. He will not even touch them. The dogs are used for target practice, being shot dead instead of humanely euthanized when the kennels are full. Cats are being caught in live traps and submerged in water, drowning inside those traps.

To sign the petition, click here.  To stay up to date on the Idabel shelter, which points to a number of instances of Richards’ utter disregard for animal life, click here.

Thank you, Abe Thomas, for exposing this disgusting facility to the world, and for saving an innocent dog from its horrors.