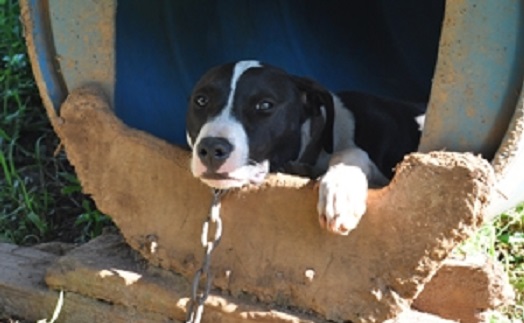 The lives of 22 dogs were saved when a Milwaukee dog fighting ring was busted on Thursday. Thirteen individuals have been arrested, and the dogs are being evaluated and given medical care.

The ASPCA of Milwaukee is in the process of assisting the police department and District Attorney in Milwaukee County.  They are helping with busts involving a dog fighting ring with multiple training, housing, and fighting sites in within Milwaukee.

On the third of April, eight search warrants were executed throughout the city, resulting in the seizure of 22 fighting dogs.  The sites were discovered containing blood on basement walls, treadmills with other training equipment commonly associated with fighting dog training, muscle building supplements, and injury care supplies.

The individuals are being accused of the breeding and training of pit bulls for fighting, or arranging the actual matches.  In one of the suspect’s homes not only were the floors and walls caked in dog blood, but the recent corpse of a dog had been discovered buried in the backyard.

These arrests cap off a year’s worth of investigation by many concerned parties.  Kent Lovern, a Milwaukee County prosecutor, reported to The Associated Press that these investigations actually began in 2011, when over 12 other dogs had been recovered from a different ring in operation at the time.

“That started an investigation into some individuals that has expanded to include other individuals,” Lovern stated.

Some of those people were included Thursday’s arrests, which will hopefully lead to even more arrests.

John Chisholm, district attorney for Milwaukee County, says extra attention is usually given to these types of cases, due to there being reports of violence against women and children as well by these dog fighters.

“As we respond to the neglect or abuse of a domestic animal, we should be looking closely at the condition of vulnerable people in the same setting,” Chisolm said.

All of the 22 dogs recovered have been medically evaluated, and are being treated.  The future, however, remains to be seen.  Each one was individually evaluated, but some fighting dogs are impossible to rehab and be put up for adoption.  Tim Rickey, who is a spokesperson for the ASPCA has said in his experience some can be placed with little concern, and others will need a more intense rehabilitation.

As for now, there is a Wisconsin law prohibiting the placement of fighting dogs whilst investigations are ongoing, due to the fact that the dogs themselves are considered evidence.