Last week we told you about Pete Buchmann, the homeless Delaware man who walks five miles every day to see his dog Buster at a shelter.  We’re thrilled to tell you that – largely because of you Life With Dogs fans – over $35,000 was raised, and Pete and Buster will soon be moving into their new home together.

“I can’t thank everyone enough,” Pete confessed to Delaware Online. “The words ‘thank you’ aren’t big enough. Buster and I are going to be together again.”

Pete recently lost his sister and mother, whom he used to care for, and unable to find new employment after losing his job, also lost his home and car.  All he had left was his nine-year-old dog, Buster.  At first they slept in a tent, but Pete felt he couldn’t be selfish, and took his buddy to stay at Faithful Friends Animal Shelter so he could at least say warm and well-fed.

The doting dog-lover walked 2.5 miles each way every day to come take him for walks, in addition to walking other dogs at Faithful Friends.  He was determined to make sure that Buster knew he wasn’t being abandoned. 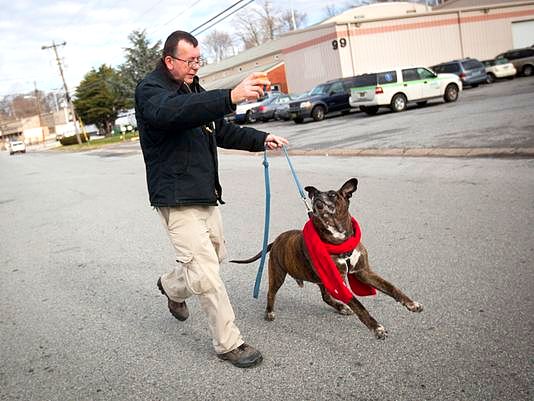 A fundraiser was set up by a kind woman named Donna.  Though in three weeks about $3,000 had been donated, it wasn’t until you wonderful fans heard about Pete’s plight that the donations really started flying in.  Now there is more than enough to get these gentlemen into a new home together, which they will be moving into on Monday.

Apartment Angels Transitional Housing Project, operating under the Delaware Apartment Association, are providing the pair with six months of free rent.  Kevin Wolfgang, president and CEO of Evergreen Apartments, who is providing the home for Pete, says every summer five apartments are given to families in need with no rent for six months.  Wolfgang’s program has provided $300,000 worth of housing for the homeless since he began the program in 2010.

“This is my passion project,” Wolfgang said.  ‘Michele Quaranta, who is association executive for the Delaware Apartment Association, sent me an email after she read the story about Pete and Buster, and asked me if we could help them out. I said yes.”

In addition to the new apartment and $35,000 Pete is receiving, he will soon start his new job as a fire inspector at Wyman Fire Protection.

“I am so grateful I can’t express it,” Pete said. “But this isn’t all about me. It’s about Faithful Friends, which has a match challenge going to raise $175,000 to care for all the other animals here. If I had had to put Buster in a kill shelter and he had been killed, I would have been so depressed for a very, very long time. His being here gave me hope.” 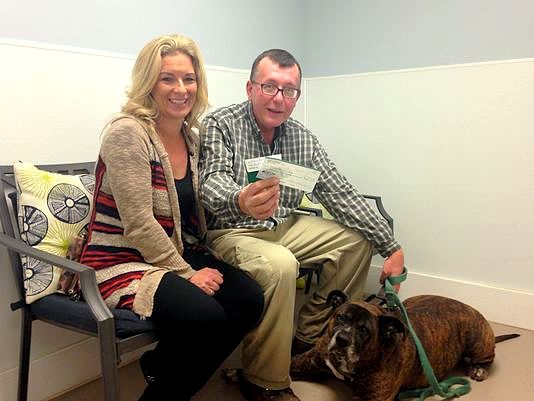 Pete is hopeful that his story will help change the perception of homeless people.

“A lot of people won’t hire someone who is homeless, but there are a lot of smart people at the shelter who want to get back on their feet.”

Reverend Tom Laymon, who runs the Sunday Breakfast Mission, says that although the shelter is currently home to 300 women, children, and men, no one will be turned away.

“We want to help the other Petes out there,” he said. “We really believe that in order to truly offer homeless men and women and families help, they’ve got to have a place of shelter, of comfort, of safety and a place of health. And, it’s got to be a place that, as I say, Jesus is on the floor, the ceiling and not just coming out of our mouth.

“It encouraged Pete, and he worked hard to make it all happen. We’re grateful that Pete is getting reset and restarted, and we’re happy that we had a small part in that.”

To donate to the Sunday Breakfast Mission, CLICK HERE.

Faithful Friends does amazing work caring for unwanted and unfortunate animals, and does their best to keep families like the Buchmanns together.  If you would like to help them continue doing this work, please CLICK HERE.  You can be a hero, too, by adopting or fostering one of their many animals in need.  To see some of them, CLICK HERE.

See Pete accept all the wonderful gifts that have been donated to him.