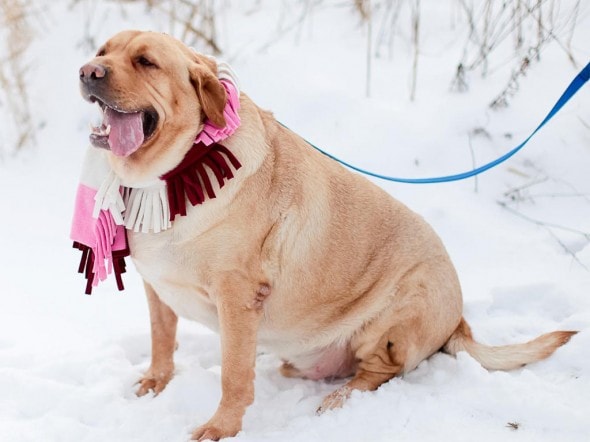 When a six-year-old Lab mix named Sam was brought to the Windsor-Essex County Humane Society in January he weighed 174 pounds. Sam was severely overweight and had difficulty getting around. With the help of his foster home, Sam has successfully lost 78 pounds and is now looking for a forever home.

Sam reached his overwhelming weight due to lack of exercise and way too much food. He was surrendered to the animal shelter in Windsor, Ontario because his original owner had their own health issues which prevented them from being able to take care of him anymore. When the shelter workers arrived at the home to pick up Sam they found two bowls, one filled with kibble and one filled with Milk-Bones. The reason for Sam’s weight problem was abundantly clear. As Humane Society executive director Melanie Coulter stated,” He was kind of, almost, loved to death.”

Sam’s weight was a serious problem. “He was extremely overweight. He had difficulty getting around. When he was taken out for a walk, for example, he couldn’t step over a parking curb,” said Coulter. Sam was placed with a foster, Tracy Calsavara. He was put on a restrictive diet and a workout regimen. Sam’s meals were portion controlled and all snacks were cut out.

His new home included three other dogs and four young kids. His life quickly became more active, though it was a struggle at first. Sam is taken for a walk twice a day, but he could only manage 10 to 15 minutes in the beginning. He now walks for 45 minutes at a time. When he first arrived at Calsavara’s home, he also struggled to keep up with the other dogs. He was too chubby to make it through the dog door, but after two months of his new lifestyle he was able to fit through and keep up with his new friends. “He was just so glad to be active and be among other dogs,” Calsavara said.

Now that Sam has reached a healthier weight, he’s ready to be adopted. “I wouldn’t say I’m ready…(but) it’s time,” Calsavara said. “There’s always another dog there waiting…that needs some help.” Those interested in giving Sam a permanent home can contact the Windsor-Essex County Humane Society at 519-966-5751.