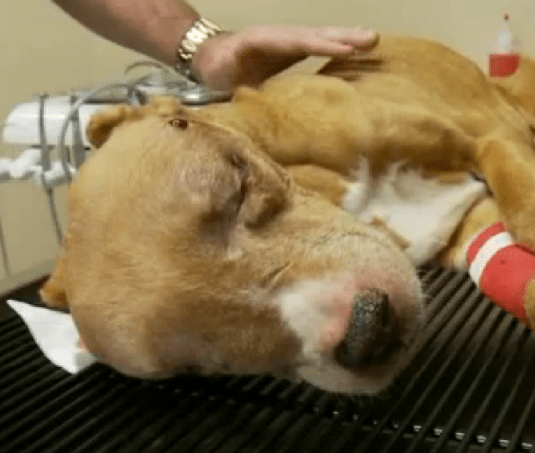 Animal lovers have not stopped calling the Lorain Animal Clinic. They all want to help Herbie, a pit bull found abandoned on Saturday. Herbie was emaciated and injured. The Ohio clinic has been receiving phone calls from places as far away as California and Louisiana with people wanting to know what they can do to help Herbie.

Herbie was found on the front lawn of an abandoned home in Lorain, Ohio. Police were called and Herbie was brought to the Lorain Animal Clinic to be treated by Dr. Thomas Wood. “You can see his ribs, you can see the spine of his scapula, you can see his pelvis bone,” said Dr. Wood. “I’ve never seen a fracture located in this area of the dog, where the frontal sinus has been destroyed.”

Dr. Wood says Herbie weighs half of what he should weigh. His injuries also appear to be old. Despite everything Herbie has endured he still is an affectionate dog. “[He] has an excellent temperament, eats right outta your hand, very loving dog,” said Dr. Wood.

Ever since Herbie’s story broke the clinic has been overwhelmed by the support they’ve received. “I’m amazed at how many people are actually calling in and asking if there’s anything they can do at this point in time for him,” said Jennifer Pappas, who works at the clinic. They aren’t just calling though. Boris Lazoff stopped by in person to make a donation on Tuesday. “I have dogs and cats and my daughter just passed away and I’m taking care of her animals. I think it’s just terrible,” Lazoff said.

Lorain police are investigating who is responsible for Herbie’s condition, but no arrests have been made. “People who do that to animals don’t have any place in our society,” said Pappas. “They really don’t, because if they’re doing that to animals, what are they doing to other people.”