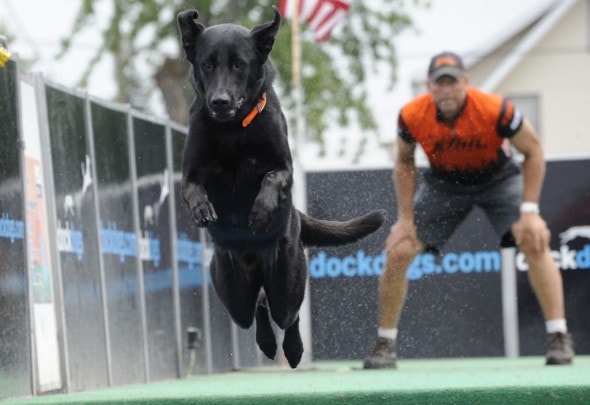 It was only two years ago that Remi was in need of a home and was unsure of what his future would be. Then Tom Dropik came into her life. Now Remi is a two-time dock-jumping world champion and most importantly a loving member of the Dropik family.

Remi, a lab-shepherd mix, bounced from home to home due to his size and energy. “He runs like the wind. People couldn’t handle him,” said Dropik. It seemed no one wanted Remi. A rescue organization reached out to Dropik, a 51-year-old dog trainer, hoping he might want to adopt the energetic pup. He agreed to take Remi temporarily. “I hated to see him put down,” said Dropik.

It wasn’t long though before Dropik fell in love with Remi. “He’s the nicest dog in the world. I fell in love with him the minute I saw him. I knew he had something special.” The two fell in love instantly and only five months later were competing in dock-jumping events.

Dropik isn’t new to dock-jumping events. He got started with his Labrador retriever Tucker back in 2001 after seeing the Great Outdoor Games. Since then Dropik has become well-known in the sport. He’s developed training techniques and devices and has trained other successful dock-jumping dogs.  The Great Outdoor Games was dropped by ESPN in 2005 but dock-jumping competitions have continued nationwide. There are four events: “big air”, “extreme vertical”, “speed retrieve” and “iron dog” which combines the first three events to form a dock-jumping triathlon.

Remi excels at the “speed retrieve” event. In that event dogs race down 20-feet of dock, then leap into a 40-foot pool of water to reach a training dummy. Last fall at the World Championships Remi covered that distance in 4.871 seconds winning the event. He repeated again as World Champion last month with a winning time of 5.07 seconds. He holds both the indoor and outdoor records for the events as well.

“He’s just amazing,” Dropik said. “He took some work and needed confidence. But he absolutely loves it.” Remi has come a long way from a dog no one wanted to a two-time world champion. Remi’s skills will be broadcast on national television this winter. Remi competed in Las Vegas in October for a show that is scheduled to air on the Outdoor Channel. “We paraded the dogs through the casino, and Remi ate it up, acting like a rock star,” Dropik said. “He loves people.”