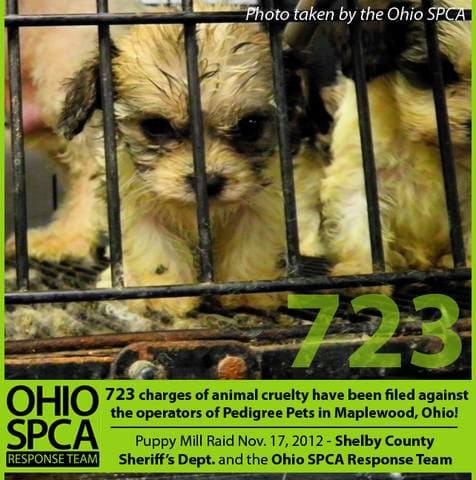 Back on November 17th a raid on Pedigree Pets in Ohio led to the rescue of 241 dogs that were being kept in deplorable conditions. Now the owners of the alleged Shelby County puppy mill and their son have been charged with 241 counts of animal cruelty each. Thankfully, 26 different rescue organizations have stepped forward to help care for the dogs until they are available for adoption.

Dave and Rhonda Auton, along with their son Adam, were each charged with 241 counts of cruelty to animals. On Monday they all entered written not guilty pleas to the charges. The charges come following a raid on their pet breeding business, Pedigree Pets, on November 17th where 241 dogs were removed from their property. The raid came after a six-month investigation prompted by complaints from concerned citizens.

While the dogs are not yet available for adoption as they are part of a criminal investigation, 26 rescues have stepped forward to help.  Many of the rescues are in need of donations to help care for these dogs.  We received an e-mail from one of the rescues. “Our rescue was lucky enough to be able to help with the fostering and care of 6 of those dogs, however due to the condition of these animals and the level of vet care that they require it has left our rescue very strapped,” said Emily Browning of Lost and Found K9 Rescue. The 26 rescues that have taken dogs from the raid are listed below.

SICSA (Society for the Improvement of Conditions for Stray Animals)