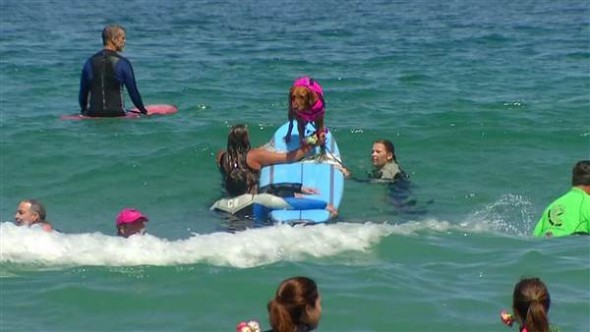 Florida teen Caleb Acosta had been diagnosed with stage four brain cancer, which prompted many rounds of surgery, radiation and physical therapy to help bring things under control.  Caleb has lost his battle with the deadly disease, and a special paddle-out was held at the beach he was brought to surf at with Ricochet, a therapy dog that surfs with special needs people.

When Caleb found out about the surfing therapy dog, it quickly became Caleb’s dream to surf with Ricochet.  That dream was made a reality by the Make-a-Wish Foundation.

“Never would I have believed that a dog — a dog — could be the bond that united so many people, that could make my son feel normal for a day,” said Caleb’s mother Cathy Franco.

Thanks to the people at Make-a-Wish, Caleb and his family were flown out to the Del Mar dog beach in February to meet Ricochet and hop on a surf board with her.

This past Sunday, a special ceremony was held to commemorate Caleb.  His family once again went out to La Jolla Shores for a special paddle out memorial that was held with others that Ricochet has helped bring through some very rough times.

“We created the bond of a family,” Franco said.  “So it’s a family reunion and we’re celebrating my son’s life and his message.  A message of hope and of happiness and of love despite the hardest of circumstances.”

The event also marks the release of Ricochet’s very own “pawtobiography.”  The book is simply titled “Ricochet” and was written by trainer Judy Fridono.  The book does include a chapter about Caleb and his journey, partly written by the teen himself.

“We carry him in our hearts, and he would be so so happy and proud to see so many people here together, said Franco.