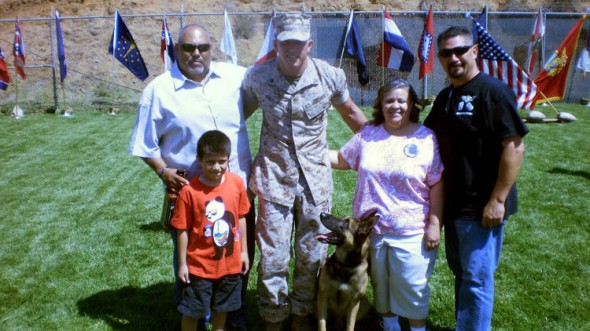 At Camp Pendleton, California a ceremony was held to both celebrate the retirement of Dino, a specially trained bomb-sniffing dog, and honor the memory of Staff Sgt. Christopher Diaz.  Diaz was killed in action while on deployment in Helmand Province, Afghanistan in September of 2011.

Dino is a six-year-old Belgian Malinois who had been with him almost since the beginning of both of their careers in the military, and the entire time they were in Afghanistan. Now, Staff Sgt. Diaz’s family have adopted Dino, and even though they are still mourning the loss of their son, they will have Dino as a reminder of their son, his hard work, and his love for being a Marine.

“I don’t think that it will decrease and of the pain we feel,” Diaz’s father Salvador said.  He is a retired Marine himself.  “He’s not going to replace Christopher but he’ll give us something that Christopher loved, the Marine Corps.”

“It’s going to be helpful – we’ll have something to hold on to,” said Diaz’s mother.

Dino will have a large backyard with a swimming pool, and will be the family’s only dog.

“Dino will be our baby,” she said.

Dino was both born and raised in Israel, and can take commands in both English and Hebrew according to Sgt. Jonathan Overland.  Overland took over as handler after Diaz was killed.

A bond was developed between the pair when Diaz and Dino worked together at Twentynine Palms before being sent over to Afghanistan on active duty.  This special bond allowed the two “to be very effective doing their job on the streets of Afghanistan,” Salvador said.

One of the family’s prized possessions is a picture sent by their son from Afghanistan showing him and Dino.

In order to adopt Dino, approval was needed from the Secretary of the Navy.  There are laws in place that allow such adoptions if it will assist the family in getting through the grieving process.

A test was administered at Lackland Air Force Base in Texas to be sure Dino showed no signs of canine PTSD before they were allowed to take him.  When completed, it was decided that Dino was fit to be adopted out.

Along with his parents were another half a dozen relatives from Southern California in attendance at the dog training facility near their home.