When Rochester Animal Control officers responded to a call for a stray injured dog on January 30th, few had any hope for her future. “There was no sensation in the hind legs at all,” says Chris Fitzgerald, Animal Control Director. “In our vet’s assessment she wasn’t experiencing pain or discomfort but could not walk.” 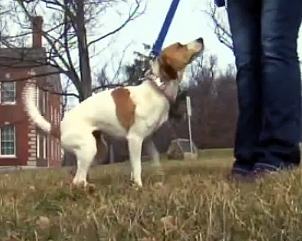 Bridget, a three-year-old beagle mix, had somehow been injured and subsequently paralyzed. But her spirit was still very much intact, and it was clear to all who met her that she was happy despite her misfortune. Refusing to give in to her injury, she used her front legs to drag herself wherever she wanted to go. Hoping to help her gain independence, a shelter volunteer brought in a wheelchair for her to try, but she rejected it.

Instead, Bridget willed herself to walk.

“She slowly started to use her back muscles a little more.  We noticed her propping herself up a little bit more and then in a stand for a few minutes,” said Going to the Dogs Rescue director Melissa Henchen.

Now, six weeks later, she is an entirely new dog. “She’s still a little stiff and she does get tired quicker but she loves to get up and run,” said Henchen. “I’m amazed to see her do it. She definitely has an enthusiasm that is hard not to catch and enjoy.”

Bridget’s recovery is hardly typical, but it is proof that anything is possible, and Chris Fitzgerald considers her a superb example of what can be accomplished with patience and perseverance.  “This is a special needs animal that people would have written off,” he said.

If you are interested in adopting Bridget, please visit Going to the Dogs Rescue at http://www.goingtothedogsrescue.org/