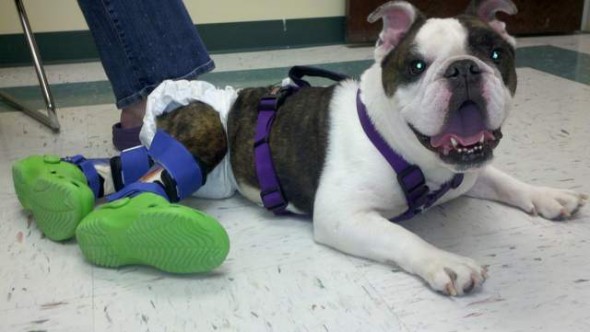 Westcoast Brace & Limb in Tampa, Florida has been helping children and combat veterans for years with orthotic and prosthetic devices. Recently they got a request for a different kind of patient. One of their latest patients is Spencer, a 2-year-old bulldog, who is unable to move his back legs.

Linda Heinz found Spencer on her front door step. He was unable to use his back legs. His vets suspect, based on the type of spinal cord injury he has, that he was dropped or stomped on as a puppy. Due to the lack of use of his back legs Spencer has never gone for a real walk. Instead he watches from his front window as other dogs walk by. “His whole life he’s spent at my feet, looking up and crying, like, ‘Pick me up! Pick me up! Take me here, take me here,” Heinz said. “He wails, and wails, and wails because he wants to be outside.”

When certified prosthetist Jason Redd first got the request to help Spencer, he wasn’t sure if he could make it work. He’d never worked on a dog before, but he was willing to try. “With people you can kind of tell them, ‘Please sit still, I have to hold it in this position,’” Redd said. “Spencer wants to get around. I’m going to help him get around as best he can.” Redd made molds of Spencer’s paralyzed legs in order to make braces for him.

On Thursday Spencer finally got to try out his braces. A pair of children’s-sized green Crocs were used to help stabilize his gait. Once fitted everyone was nervous waiting to see how Spencer would handle his new legs. Spencer walked right out of the examining room and started running up and down the clinic hallway. He ran around so much he had to stop for a drink of water. Redd’s work with his first animal patient was a success. “I wouldn’t mind doing more animals,” he said. “They’re fun to work with.”

When Spencer got home he finally got to go for that walk that he had been yearning to take. “Now he can explore and get into trouble like a normal dog,” said Heinz. “He’s the happiest creature you’ll ever meet. He wakes up happy. He never has a bad moment.”