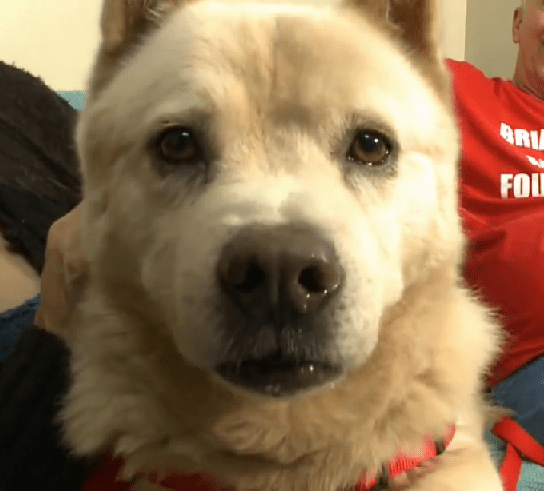 For three years Chen refused to believe that his owners had left him behind. He waited in the yard of the home he had shared with them, refusing to leave. They never did come back, but a happy ending was still possible for Chen. Lisa Renstrom came to Chen’s rescue and has found him a new home.

Renstrom, who works with Chap’s Chow Rescue, heard about the Chow Chow from a neighbor. Year after year Chen had stayed outside of his home in Gwinnett County, Georgia waiting for his owners to come back. They never did. “He absolutely would not leave that house,” said Renstrom. “In the middle of the day he would go run and get scraps of food. There was a Kroger and he would pull scraps out of the trash.” Some neighbors reportedly even threw rocks at Chen, but he refused to leave what he knew as home.

Renstrom spent two weeks getting Chen to trust her. Using food and a gentle voice she was able to get close enough to collar him and bring him to safety. Renstrom then spent the next couple weeks finding a good home for Chen. She found one in Ben Rupp.

Rupp was hundreds of miles away in Ohio when he saw Chen’s picture on a web site. Rupp’s own Chow mix named Goldie had just passed away after 13 years. Rupp was drawn to Chen because he had similar features as Goldie. “The pictures and the story, it all came together,” Rupp said. Rupp made several phone calls and took a private jet to go to Georgia and get Chen and give him a new life. It was a bittersweet goodbye for Renstrom at the airport. She had grown close to Chen over the past few weeks. “I hope he’ll be happy,” she said. “He deserves all the happiness.”

7 thoughts on “After waiting three years for a family that would never come back, Chen gets a new home”