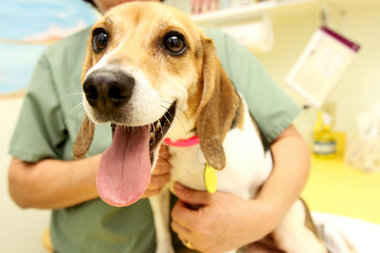 Emmy Lou was found in the woods of southern New Jersey in bad shape. She was malnourished and dragging her back legs. Taken to the SPCA and then rescued by a local animal rescue, she is now getting a fresh start with a new family.

A hunter in southern New Jersey discovered the 7-year-old beagle dragging her back legs and brought her to the local SPCA. Emmy Lou was described as “skin and bones” when she was found. Once taken to the local SPCA it was discovered that her legs were not broken, but that she was in fact paralyzed. Emmy Lou also needed intensive care because she couldn’t even move her head to eat or drink.

The SPCA did find a microchip for Emmy Lou, but it was never registered. The SPCA hoped an owner might come forward, but one never did. With no owner coming forward, Carol Kirshenbaum of Quack’s Corner Animal Sanctuary stepped forward to take the dog, telling the SPCA, “Don’t put the dog down. I’ll get her.”

She has slowly been getting better with treatment. She is able to put her head down to eat and drink now. In recent days she has shown some movement in both of her back legs. Despite these improvements she will still need a customized wheel chair to help her get around. The wheel chair is estimated to cost around $400.

Emmy Lou has a happy ending in her future. Deb and Tim Ritchey from Barboursville, Virginia have a house and yard designed specifically for special needs animals. They previously adopted an animal from southern New Jersey three years ago and are planning to take Emmy Lou home with them in a few weeks.