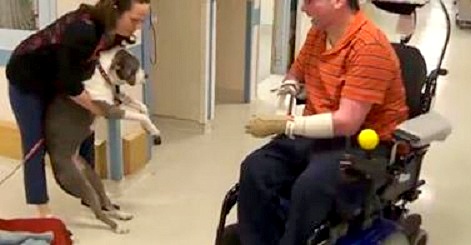 Elsa is a pit bull who escaped an abusive home as a puppy only to suffer a stroke a few months later, rendering her paralyzed.  But her new family has done everything they can to help her, and now she’s helping others going through similar situations. 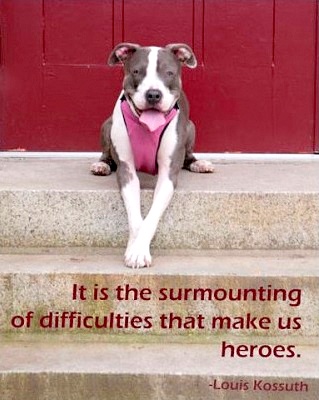 In 2010, Elsa was one of twenty seven dogs saved by the BC SPCA from a hoarding/breeding house in Vancouver.  All of the dogs brought to HugABull Advocacy & Rescue Society were sickly – malnourished and afflicted with mange and respiratory problems.  Elsa made a tremendous recovery, and at five months, was adopted by Kelly Dann and her husband Nik.

“Elsa was a very adventurous pup,” Kelly said.  She loved to go hiking in the woods and go fishing with her dad. Elsa always had a happy go lucky attitude!” 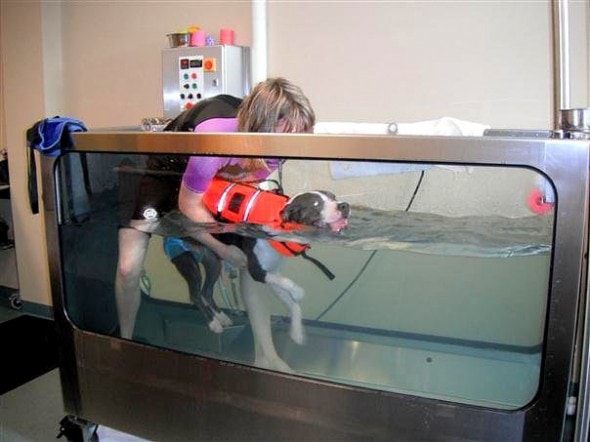 “One day, at the age of 13 months while playing at doggie daycare, Elsa suddenly collapsed.  She became totally paralyzed, from her shoulders down. We rushed her to a vet. An MRI confirmed she had suffered from a fibrocartilaginous embolism. In plain English – a blockage in her spinal cord that resulted in paralysis. My husband Nik and I decided to enroll Elsa in an intensive rehabilitation program. She worked very hard at physiotherapy for 16 months. She has since relearned how to walk.” 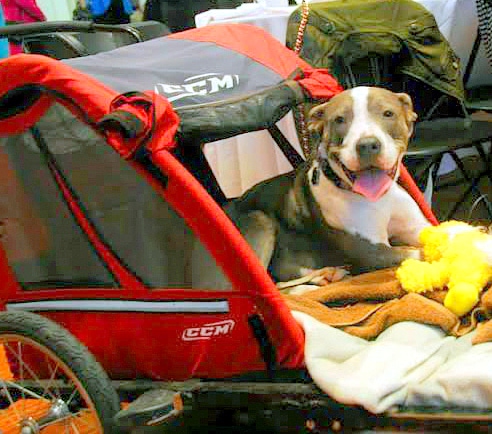 Elsa still has some trouble walking, despite her astounding progress.  She has a doggie buggy to happily be carted around in when she gets too tired.  But she doesn’t let her injury keep her from being social and helping others.

“Throughout Elsa’s troubled start to life, she has always remained one the happiest dogs I have ever met. Her love for people is what inspired me to try her out as a pet visitation dog,” Kelly said.  “Elsa passed the screening process. She is now a certified pet visitation dog through the Pets and Friends organization. Elsa does weekly visits to GF Strong Rehabilitation Centre in Vancouver, BC where she inspires people with brain and spinal cord injuries to never give up.” 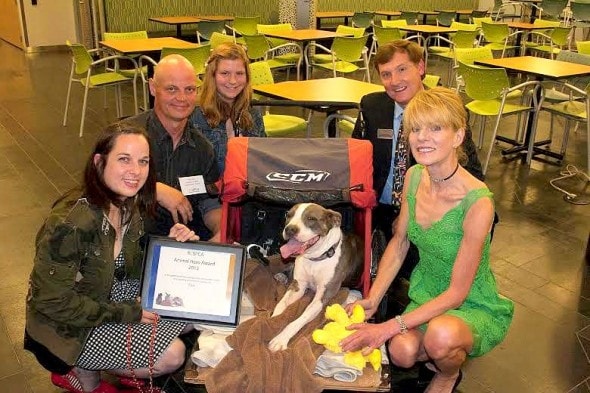 “Initially I just wanted to keep Elsa active and stimulated after her stroke so this was a way for us to do something together.  And my hope was to maybe inspire some people that have gone through a similar situation as Elsa to never give up and hang in there.

“Recently Elsa was honored in a ceremony in May and awarded the BCSPCA ‘Animal Hero Award 2013.’  She is an ambassador for her breed and for shelter dogs.” 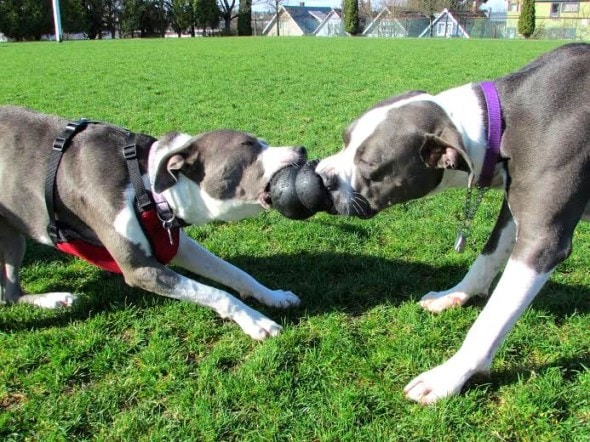 “It’s great, and she’s endured pain and she’s been through rehab too,” he said. “She’s the cutest dog I know… She makes lots of people smile here, a lot of people.”