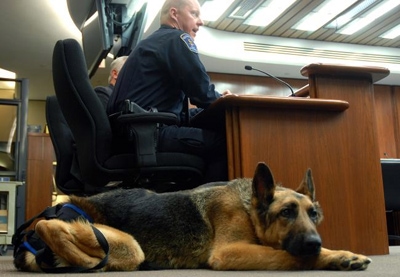 On Nov. 12, 2010, Major was stabbed in the spine while searching for suspects in a Maplewood burglary, leaving him permanently disabled.

Four months later, he is adjusting to life after police work as he and his handler Officer John Jorgensen enter the running for a national award. America’s Most Wanted All-Stars is an award for an outstanding first responder, police officer, firefighter, or paramedic. Given John Jorgensen’s professional accomplishments and his devotion to Major, we can’t imagine a more worthy recipient.

To see Officer Jorgensen’s nomination page or to vote for him click here, and don’t wait long – this is the last week of finalist voting.