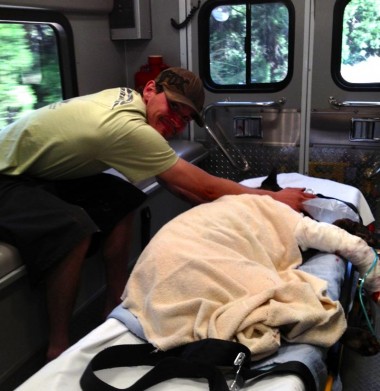 Three Lake Arrowhead, California paramedics went above and beyond their job when they came to the rescue of a German shepherd  that was severely injured.

The crew of Engine 92 was heading back to the fire station on Friday when they spotted an injured dog beside Highway 173. Sadie was with her owner Matthew Tippens and Tippens’ mom Brenda. She had been hit by a car and was severely bleeding from her leg. All three members of the crew were paramedics and they quickly came to the aid of Sadie. They bandaged up her bleeding leg but were don’t helping there.

Tippens had no way of transporting his dog to a veterinarian so the three paramedics went to a nearby fire station that housed two reserve ambulances. They wrapped Sadie in a blanket, loaded her onto a gurney and even gave her some oxygen while they transported her to a nearby animal hospital. Sadie would end up losing her leg but  received the necessary care she needed thanks to the efforts of the three paramedics.

It’s not typical for paramedics to come to the aid of an injured animal. “We’re not trained to provide EMS to pets,” said Ryan Beckers, spokesman for the fire department. “But bandaging a dog’s or person’s arm are fairly similar. The crew made the decision to help this family in need, and we’re glad to hear Sadie should recover.