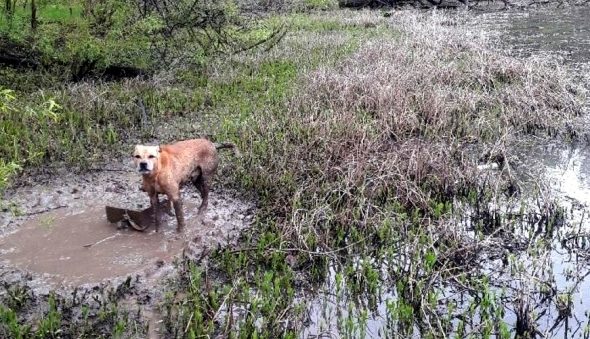 Park rangers in Missouri likely save their share of wildlife, but were shocked come across a dog burdened with a heavy chain attached to a concrete block while patrolling an area around a lake.  Thankfully they were able to save the poor thing before water rose high enough for him to drown.

It was on Friday, April 28th that the scared, dirty Lab/shepherd mix was found tethered to a 12” x 12” CMU (concrete masonry unit) at Longview Lake, just outside of Kansas City.   Rangers contacted Tonya Hampton, an animal control officer and employee of the Great Plains SPCA.

“There is no doubt this was intentional,” she said.

After his rescue, the dog was named Deputy.  It is clear that the middle-aged dog was abused and “presumably left to drown in high water levels,” according to a statement by the SPCA.

“When I arrived, I was able to gain his trust by offering treats and was able to free him from the cinderblock and he walked into a kennel without hesitation,” Hampton told PEOPLE. “Once at the shelter he was still a little reserved, however, after a few minutes he [lit] up as if he knew he was safe. We gave him a bath since he was so very muddy, and he seemed to appreciate our efforts.”

Deputy is now recuperating from his dismal life at the Great Plains SPCA’s Independence shelter, and will likely be up for adoption soon.  Anyone with information about who might have done this is asked to call Jackson County Animal Control at 913-475-6164.

“Our hope is that he finally knows what true love and safety really means, as he has been through so much already,” Hampton said. “I wish people were more like these dogs, so forgiving and loving. Mankind would be much better off.”