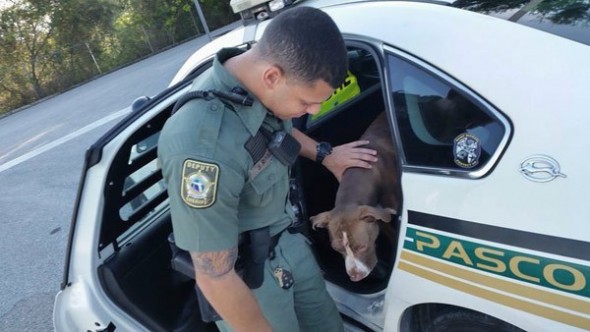 In Pasco County, Florida, a sheriff’s deputy found an injured dog behind a store in the Fox Hollow area.  The dog seemed to be wandering aimlessly, and seemed to have fresh injuries on him.

Deputy Riyad called in animal control, but decided to stay with the injured dog until help arrived.  He had noticed fresh looking wounds on the dogs face, head and body.  This lead the deputy to believe that the dog may have been used in a fighting ring, as a bait dog.

“Dep. Riyad thinks the dog might have been used for dog fighting,” the Pasco County Sheriff’s Office said in a press release.

Some people on Facebook also think that the dog may not have been used as a bait dog, but may have the injuries for another reason.  Some people are saying that if the injuries are only on the dog’s face, he may be an escapee from a kennel or some dog enclosure.  He could have recieved the injuries from that.

“If it’s just face injuries and the dog is nice then chances are the dog got out of a cage or kennel or fenced area and was not used for fighting,” one Facebook user wrote.

No matter what the circumstances, the important thing is that the dog is going to be OK, and no the search is on to see if the dog has a family or not.