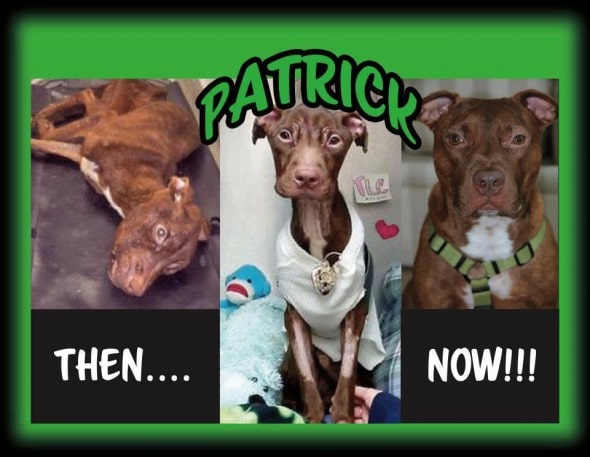 After pleading not guilty back in January, New Jersey resident Kisha Curtis has now pleaded guilty to fourth-degree animal cruelty for her treatment of the now-famous pit bull, Patrick.

Curtis had denied abusing the dog, claiming she left him tied up in a hallway outside her apartment in 2011, and then left the state for a week. But in a turn of events, she has now pleaded guilty to charges that she put her emaciated dog in a plastic bag and threw him down a garbage chute.

She also finally gave up custody of Patrick, who has been staying with Patricia Smillie-Scavelli, administrator of Garden State Veterinary Specialists, since his treatment.

“He really gives love, Smillie-Scavelli said. “He climbs into your lap – he would prefer to sit in your lap than lay on the floor. He also sleeps in our bed at night, along with the cat.”

Patrick was discovered moments before being put into a trash compactor. He weighed only 19 pounds, about 30 pounds less than he should have. Curtis claimed that she only had him for two days days and hadn’t even named him, but veterinarians say that the kind of starvation Patrick endured lasted for months, if not his entire life up until his rescue.

In addition, Mark Ortman, security guard of the Newark apartment complex where Curtis lived, called her a “stone liar.” He says she left the dog in the hallway twice before in a three-week period after being bitten by him.

“I waited until she brought the dog back inside both times,” Ortman said. “I’m convinced she starved and harmed and deprived the dog and threw the dog down the chute.”

Despite his rough beginnings, Patrick has made a miraculous recovery. Veterinarians thought he wouldn’t survive, and thought it would be best to put him to sleep.

“But of course, he looked up at you with those eyes, and you say: How can you give up on this dog? How can you, when he’s not giving up on life? So, we gave him that second chance, and he has just run with it, and thrived,” his foster mom said.

After weeks of emergency treatments, including a blood transfusion, a special diet, medication and physical therapy, the dog that was so weak he could barely move, began to put on weight and recover from his ordeal.

Patricia and her husband, Dr. Thomas Scavelli, have been hoping to adopt Patrick, and may have their chance now that Curtis has relinquished custody.

“There are very few animals, or any life form, that could have gone through and survived what he has, and really never looked back,” Scavelli said. “This is not a month of starvation. This is a lifetime probably, or at least months and months of neglect, and to see the way he cares for people and trusts people, that’s really been the most interesting and rewarding thing to see about the canine spirit.”

His tragic story and marvelous will to live have touched the hearts of millions. His Facebook page has over 270,000 fans, and the Essex County Courthouse has received more than 600 letters and faxes from supporters around the world, asking for Curtis to receive the harshest punishment possible.

Curtis’ trial is set for today. Though she faces up to 18 months in prison, she may not see any time behind bars due to her pleading guilty and because this is her first offense. Despite the chance that she will not receive formal punishment, the public is already issuing their own – Curtis says she is routinely harassed when she goes out in public.