On February 20, 2014, an American Bully was found on the 8600 block of 8th Ave SW, in West Seattle. The female stray dog showed signs of abuse, including an embedded collar. It took rescuers 20 minutes to gain her trust, but once the canine was no longer afraid to death, she came out of hiding and allowed a Good Samaritan and a Humane Law Enforcement Officer to bring her to safety.

Seattle Animal Shelter took care of the canine and named her Penny. After discovering the extent of her abuse, and treating her for the badly embedded collar that required surgical removal, the organization put out a plea to capture her abusers. A $5,000 reward is being offer to anyone with information on the person(s) that inflicted the abuse, but as of yet, no one has come forward with a significant tip that leads to an arrest. 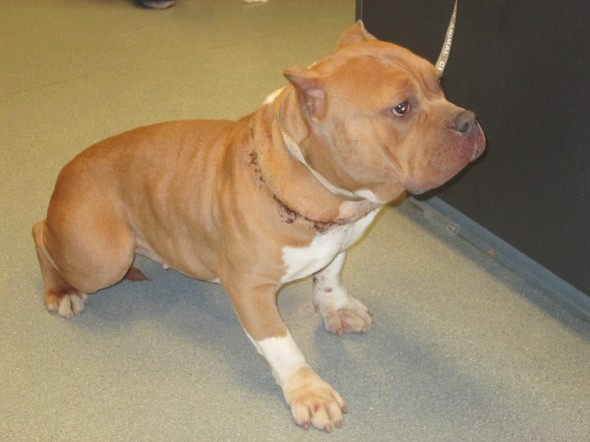 The good news is that Penny made an incredible recovery and she has now been adopted by a loving family. She is spoiled, well cared for, and shares her home with another dog.

According to Dan Paul, Washington State Director for The Humane Society of the United States, neglecting an animal to the point that no one loosens a collar that is literally cutting into the flesh of the animal’s neck is unconscionable and a clear violation of our state’s animal cruelty statutes.

“We are grateful that this dog is now safe in the good hands of the Seattle Animal Shelter staff,” Paul told Highline Times. “And we hopeful that this reward brings forward anyone with information about this heinous act of cruelty.”

Authorities are still looking for her abusers and if you recognize dog and know who abused her, please call Seattle Animal Shelter Manager of Field Services Ann Graves at (206) 386-4288. Please reference case number 14-13914. Any information about the dog’s previous whereabouts is vital to solving this case.